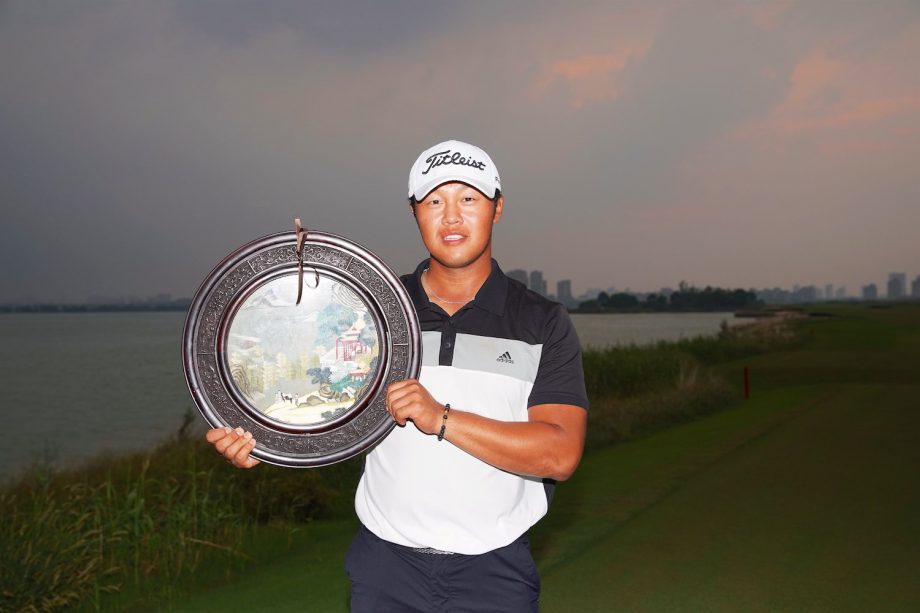 SUZHOU, China—Standing on the tee on the final hole of the Suzhou Open, Canada’s Richard Jung trailed China’s Yechun Yuan by a stroke. He knew what he needed to do. Jung drained a 40-foot birdie putt on the 72nd hole for a closing 4-under 68. Jung then watched as Yuan made a double bogey on the same hole, giving Jung his first PGA TOUR Series-China title and what was ultimately a wire-to-wire win, finishing two ahead of Yuan of China.

The 25-year-old Jung, a South Korean by birth who plays under the Canadian flag and is a former member of Team Canada, carded a 21-under total of 267 at the Gary Player-designed Jinji Lake Golf Club, where big crowds—many hoping to see Yuan win his first event as a pro—enjoyed a dramatic weekend of action despite weather delays, Sunday no exception.

Jung shared the lead after the first three completed rounds with England’s Callum Tarren, who also played in the final group. Like Yuan, Tarren double-bogeyed the last to finish third, at 18-under.

Jung was one shot behind Yuan after 10 holes of the third round when play stopped Saturday, forcing him to finish his final seven holes Sunday morning. He finished with a share of the lead with Tarren, the duo both shooting rounds of 65-67-67.

As the three battled all afternoon during the final round, Jung watched on the 18th hole as 21-year-old Yuan sliced his tee shot into trouble. Yuan hacked his second into the rough, leading to the double bogey, while the Seoul-born Canadian hit a 6-iron approach to almost 40 feet before holing a huge birdie putt and celebrating wildly.

Dramatic finish on hole 18! 💪💪💪💪
Richard Jung of South Korea sinks 40-footer for birdie after Yechun Yuan makes a double-bogey on 18 to win the Suzhou Open! 👏 pic.twitter.com/rikSAVIL3X

“Once Yuan hit his second shot in the rough again, I was very relieved because that really took off a lot of pressure,” Jung said. “I knew that if I just made par and he somehow made a bogey, then there would still be a playoff.

“I stayed relaxed,” Jung added, “hit a draw 6-iron and the ball stayed dead still and it was close to a 40-footer for birdie. Then I dropped the bomb, so I was very happy with that.” Jung became the third Canadian in history to win a PGA TOUR Series-China event, joining Eugene Wong and Justin Shin, both champions in 2015.

Jung was thrilled with how he kept his composure in front of the huge crowd and was even happier to secure his biggest win as a pro, which should propel him into the top-10 of the Order of Merit with four events left on the 2018 schedule.

“I loved the crowds. I played once before in crowds this big, but it has been a while since I’ve been in front of this many people. It was a little nerve-racking, but I held myself together, so I’m thrilled,” added Jung, whose previous-best result this year was a tie for eighth at the season-opening Chengdu Championship.

“Happy is one word I can say right now. So happy to get the first win under my belt. I’ve been in this position a few times but just couldn’t bring her home, so I’m just very happy with how I played today.”

Yuan, who turned pro on Tuesday after winning a team silver medal in the Asian Games last week, almost won his first event as a pro six weeks after becoming only the second amateur to win on the Tour, having to decline the RMB 270,000 winner’s check after claiming the Qingdao Championship in July.

The former University of Washington golfer has played in the final round’s last group four times in five events on this year’s Tour.

“I am happy with my performance. I didn’t play my best at the Asian Games, so I didn’t have too high expectations this week. This is my first event after turning pro, so it was good to play so well,” said Yuan, expects to come back stronger after learning from the defeat.

“Golf always has its ups and downs, so as a player I’m sure I’ll learn from it and be able to adapt better next time. It’s the experience that counts and although I missed the title, I’m not too unhappy.”

Tarren, 27, was hoping to become the first Englishman to win on this Tour and has come close on many occasions, with three runner-up finishes among a record six top-10s this year.

“There was some incredible golf played between all three of us. One guy would take the lead then another would take the lead, but obviously Richard got it done in the end,” said Tarren, who tied for 29th in last week’s European Tour event in Prague. “He deserves to win, especially with that final putt. That was a great putt and he played very well. I’m playing great, so I don’t feel too disappointed.”

South Korea’s Todd Baek and American Joseph Winslow, both in the top five on the Order of Merit, finished 17-under to share fourth with New Zealand’s Nick Voke, impressing in his Tour debut.

Japan’s Taihei Sato (67) was seventh, at 16-under, two ahead of Order of Merit leader Charlie Saxon, while Japan’s Yuwa Kosaihira, sixth on the Order of Merit, was ninth at 12-under.