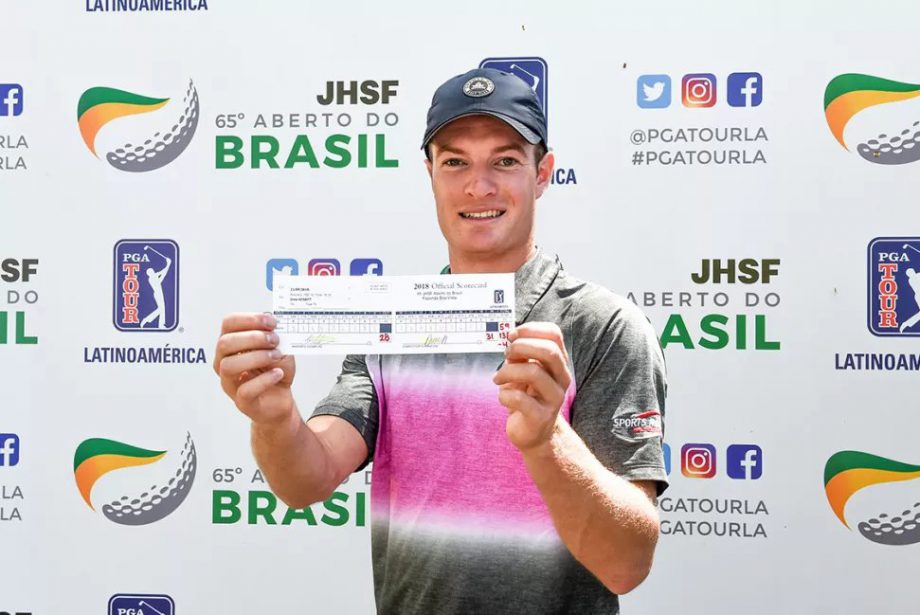 PORTO FELIZ, Brazil—Canadian Drew Nesbitt made history Saturday morning at the Brazil Open when he completed his second round at the weather-delayed event and shot the first 59 in PGA TOUR Latinoamérica history.

In 16 previous PGA TOUR Latinoamérica rounds, Nesbitt’s low 18-hole score was a 66 he shot in the second round of the Molina Canuela Championship in Argentina in April. His 59 came courtesy of—count ‘em—four eagles, including a hole-in-one, five birdies, a bogey (yes, a bogey!) and eight pars.

“Obviously, 59 is a magical number out here. But just to make the cut after what I shot [Thursday] is a great accomplishment. To do it with a 59 is even more special,” said Nesbitt, alluding to his opening, 8-over 79. His 20-stroke improvement is easily the best turnaround by any PGA TOUR Latinoamérica player in 2018.

Nesbitt played seven holes of his second round Friday afternoon at Fazenda Boa Vista prior to officials blowing the horn due to darkness. After a disappointing round that included a triple bogey, two double bogeys and four bogeys that led to the 79, Nesbitt was just hoping to put something together that would give him a chance to play on the weekend.

“I knew I eventually had to shoot a low round if I was going to make the cut,” Nesbitt said.

He did just a bit better than that.

“On the first hole of the day,” Nesbitt said, “I happened to knock it in from 100 yards and get my day started pretty quickly. I followed it up with another eagle. I hit a good 6-iron (second shot) from about 210, 215 (yards). I happened to make that putt.”

Suddenly by taking only five strokes, the native of Toronto, had knocked four shots off par and was 4-over for the tournament.

Things stalled for Nesbitt on his third hole of the round when he bogeyed the par-3 12th to drop back to 5-over for the tournament. Four pars followed, with seemingly nothing special in the making when his day ended as darkness fell on the course that is hosting Brazil’s national open for the first time.

Saturday morning, Nesbitt returned to the course, and his third eagle of the round, on No. 18, moved him to 3-over.
Still, Nesbitt’s thoughts were just on making the cut, something he had done three times in five previous 2018 PGA TOUR Latinoamérica starts. “I just made the turn thinking I might have a chance.”

On the front nine, Nesbitt rolled in a birdie putt on the par-4 first. He then faced a 159-yard tee shot on the par-3 second, with the pin in the front of the green. “It was about three yards uphill, with a very large backstop behind the flag. I knew I could just put a good swing on a 9-iron, and anything that landed behind the hole with any amount of spin would come back toward the flag. I happened to land it in a perfect spot, with the perfect amount of spin, and it found its way into the hole. Just a nice, stock 9-iron, and that did the trick.

Nesbitt was now 8-under for the day and, amazingly, even-par overall. Knowing the projected cut was either 1-under or 2-under, Nesbitt knew he still had some work to do.

A birdie on the par-5 third hole got him to 1-under, but to be safe he decided he needed one more birdie—and no bogeys—coming in.

“From there, I figured, well, I just need to make one more birdie (to make the cut), which I did,” he noted, even though his momentum slowed a little with pars at his 13th, 14th and 15th holes. He had three chances left, all par-4s.

“Then I happened to birdie the last three, to shoot 59,” Nesbitt said, smiling, an oh-by-the-way result he had actually considered but wasn’t really thinking about. Again, making the cut and earning a paycheck were foremost on Nesbitt’s mind

Birdies at Nos. 7 and 8 left him sitting at 11-under. A driver and an approach to No. 9 would give Nesbitt a chance.

He faced an eight-foot birdie putt on his final hole of the round for the elusive 59.

After lining up his putt, Nesbitt paused and re-marked his ball, starting over his routine. The lefthander then placed his ball and put his coin back in his pocket. After a couple of practice swings, he calmly drained the putt and pumped his left fist.

He not only had made the cut, but he also put his name in the PGA TOUR Latinoamérica record books.

“Today, I obviously had a lot of fortunate breaks. To hole out two shots is incredible. To make an eagle in a round of golf—let alone four I made today—is absolutely outstanding,” Nesbitt said. “I can’t really describe how it happened or why it happened to me, but today it did. It was my day to shoot that number, and I kind of capitalized on it by making some great putts down the stretch.”

Amazingly, even with a 59, Nesbitt hit the 36-hole mark tied for 30th, 10 strokes behind leader Alex Rocha.
In five PGA TOUR Latinoamérica events this season, Nesbitt’s best finish is a tie for 22nd at the season-opening Guatemala Stella Artois Open. He tied for 28th last week at the São Paulo Golf Club Championship. His lowest 18-hole score this season prior to his second-round heroics was a 66. His other lowest PGA TOUR-affiliated Tour rounds, a pair of 69s, came at the 2017 Mackenzie Investments Open on the Mackenzie Tour and at the 2017 RBC Canadian Open on the PGA TOUR.

.@DrewNezbitt 🇨🇦 made history this morning, shooting the first 59 in #PGATOURLA history 🔥🔥🔥. Great round with a hole-in-one and a bogey. 4 total eagles. Incredible!#AbertodoBrasil #BupaChallenge pic.twitter.com/ngxXG1uQ5x