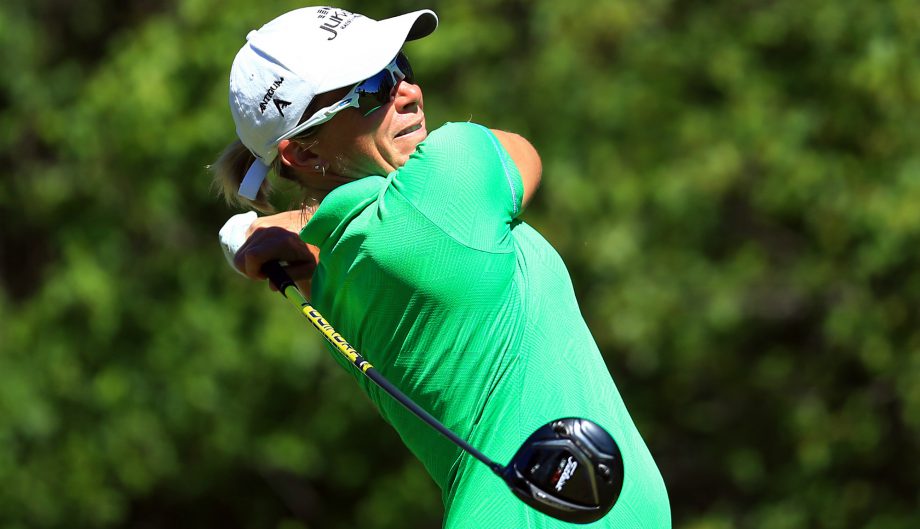 Sharp eagled the par-5 12th hole en route to a 6-under 66 while Marchand opened with a 67. Both were within striking distance of Norway’s Suzann Pettersen and South Korea’s Mi Hyang Lee, who shared the lead at 8-under 64.

“I knew I needed to shoot a low round,” Sharp said. “But you don’t really want to think about a score in your mind. The way I’m hitting it I knew I was going to have a lot of chances and I took advantage of the par fives. I was 5 under on those so that really helped me out.”

Canadian @AlenaSharp is very appreciative of the support she receives when she comes back to her home country. She shot -6 @ManulifeClassic pic.twitter.com/TPf9PfnZEJ

South Korea’s Hyo Joo Kim, Belgium’s Gonzalez Escall and China’s Shanshan Feng were one shot off the lead at 65.

Brooke Henderson of Smiths Falls, Ont., had an uneven performance in the warm, sunny conditions. She was visibly frustrated after missing a few short birdie putts around the turn and finished with a 71.

“I hit a lot of really great shots and the putts just didn’t drop today,” Henderson said. “But hopefully I can switch things around tomorrow and everything will be good.”

Pettersen, meanwhile, recently lost her yardage book for the course and had to write notes from scratch this week. She trusted her eye and it paid off with six birdies over one eight-hole stretch.

“We woke up this morning to perfect conditions,” she said. “You can fire at pins and get to par fives, which is fun. I think it’s the best way to set up a golf course and get low scores.”

Sharp, from Hamilton, started on the back nine. She bogeyed her opening hole before recovering on the 12th, using a 6-iron to leave herself a 15-footer for eagle.

Sharp connected and followed it up with three birdies over her next four holes.

Marchand, a Symetra Tour player entered as a sponsor’s invite, also had an early morning tee time. The Orangeville, Ont., native fired seven birdies over her round to go with a pair of bogeys.

She even had the clubhouse lead for a spell.

“I’ve shot 5 under before but never in an LPGA event, so it’s pretty cool,” Marchand said.

The course dried out a little as the round progressed. Warm temperatures were expected to continue through Sunday’s final round.

The 6,613-yard track is still recovering from an unusually wet and cool spring in the area. Players were allowed to lift, clean and replace balls on closely mowed fairway areas.

Those who kept drives long and tight could attack the soft greens.

“I just made a lot of key putts today and that kept me going,” Sharp said. “I made a lot of six- to 10-footers, which is what I’ve been working on. It’s nice to see the results coming early in the tournament.”

Jodi Ewart Shadoff of England and Emily Pedersen of Norway were tied with Sharp in sixth place at 66.