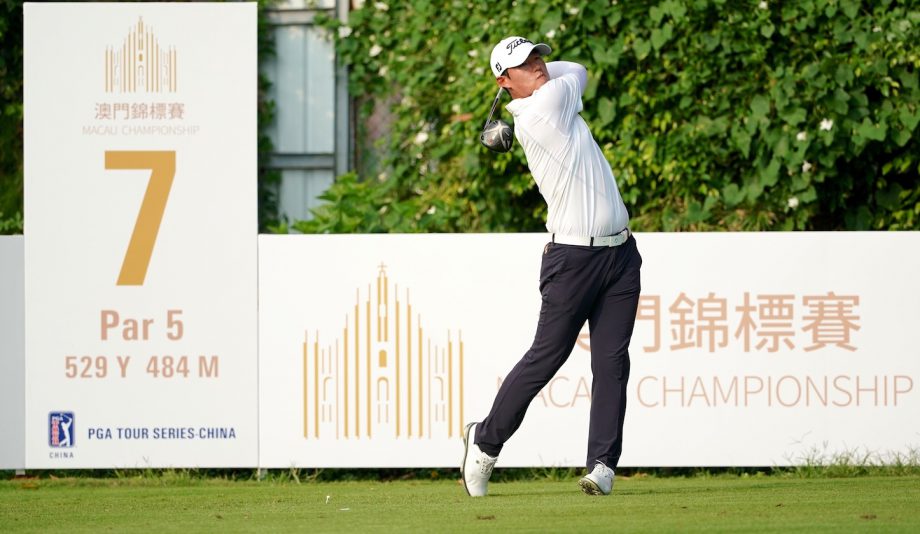 MACAU, China—Canada’s Justin Shin fired a 9-under 62 to move to 17-under and open up a five-stroke lead at the Macau Championship, the final event of the PGA TOUR Series-China season.

Shin managed to improve on an opening-round 63 by carding eight birdies, one eagle and a bogey on Friday at Caesars Golf Macau as he looks to win his first Tour title since winning the United Investment Real Estate Wuhan Open in 2015.

American Charlie Netzel carded a 63 to lie in second, at 12-under, two strokes ahead of Canadian Richard Jung (67) and France’s Cyril Bouniol (66), who is hoping to retain his fifth spot on the Order of Merit.

Order of Merit leader Max McGreevy fired his second consecutive 67 to lie in a tie for eighth and is on the verge of locking up full Korn Ferry Tour status for 2020 after No. 2 on the Order of Merit Trevor Sluman missed the cut. McGreevy is virtually assured to earn Player of the Year honours as it would take a variety of unlikely scenarios over the weekend for either Luke Kwon or David Kocher to overtake McGreevy.

Shin, who was born in South Korea, has struggled with his game all season and is 67th on the Order of Merit after playing in eight events. However, a recent putter change last month followed by a pair of strong finishes on the Korean Tour has apparently given Shin back his confidence.

The naturalized Canadian, who teed off on hole 10, made a lot of birdies Friday including six on his back nine (Caesars Golf Macau’s front nine) but admits the highlight of the day was his hole-out for eagle on the par-4 11th, which put him at 3-under after his opening two holes.

“It was a little down-breeze, and I was 134 yards out so I hit a little 52 (-degree wedge), and it was actually going pretty far, and I was worried it might go over the green,” said Shin. “But it two-hop rolled in, and I got the yardage just right. That was probably the best part of the day.”

Then after four straight pars, Shin bounced back from a what he called a silly bogey on 16 with a birdie on 17 before turning up the heat on the final nine to card six birdies including closing with three in a row.

“That par-3 where I made bogey, I was a little off because I three-putted a one-and-a-half footer,” said Shin. “Luckily I got back right away and made birdie on 17, and that helped me keep it going and have a great finish.”

Despite holding a large advantage, Shin is determined to keep going for more birdies as he knows how quickly a lead can evaporate. At the Tour’s Cadillac Championship in 2016, Shin was in a similar position before two-year Korn Ferry Tour player Alex Kang came from behind to steal the win.

“I’ve been in this position before. Two years ago, when Alex Kang won, I was 18-under after the second round, and he shot a 10-under then a 5-under on the weekend to finish at 29-under to beat me,” said Shin. “So, I just want to be like that and try to finish 26- or 27-under. That’s my goal for this weekend.”

Netzel, who is 23rd on the Order of Merit, is projected to jump into 10th if the same scenario holds until Sunday. However, the tall lefty isn’t getting ahead of himself and is playing with a care-free mentality this week.

“I’m already into second stage (of the Korn Ferry Tour Qualifying Tournament), so I’m just playing free this week and whatever happens happens. You play every event trying to win so that’s still the plan,” said Netzel. “If somehow I could win or finish strong and sneak into the top 10, that would be a huge bonus.”