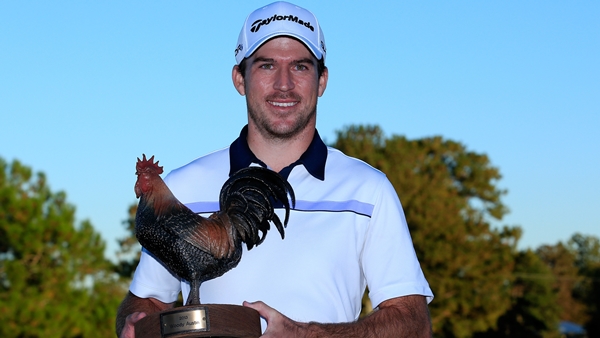 JACKSON, Miss. – Nick Taylor was down on his game over the summer, struggling with his putter as he fought to earn a PGA Tour card.

So even he was a little stunned Sunday when he was holding a big bronze rooster and celebrating a comeback victory in the Sanderson Farms Championship.

The 26-year-old Taylor overcame a four-shot deficit at the Country Club of Jackson, shooting a 6-under 66 on Sunday for a two-stroke victory over Boo Weekley and Jason Bohn. Taylor, a former member of Golf Canada’s National Amateur Team, is the first Canadian-born winner on the PGA Tour since Mike Weir in 2007.

“It’s kind of hard to believe that I’m in that category now,” Taylor said.

Taylor, who said he grew up admiring Weir, won the tournament with nearly flawless work on the greens. He played the front nine in 4 under to pull even with the leaders and took control with birdies on Nos. 13, 14 and 15. He made four birdies from 15 feet or more, charging up the leaderboard and then staying at the top.

Even though it was just his 13th PGA Tour start – and seventh as a professional – he handled the final holes with little drama. He calmly made a 9-foot putt to save par on No. 16 and his tap-in for bogey on 18 was easily good enough for the win.

“Going into today, I was feeling good about my game,” Taylor said. “But until it really happens, you never really expect it. It’s very surreal. I putted unbelievable today.”

A former University of Washington player from Abbotsford, B.C, Taylor three-putted for bogey on No. 18 after taking a three-shot lead into the final hole. He finished at 16-under 272 and earned $720,000. He is now exempt through the end of the 2016-17 season and will play next year in the Hyundai Tournament of Champions, the Players Championship and PGA Championship.

“I didn’t drive the ball as well as I wanted the first three days and kind of worked on some things yesterday and it came together today,” Weekley said.

But nobody was catching Taylor.

John Rollins had a two-shot lead coming into Sunday, but faded with a 73 to tie for fourth at 13 under with Peter Uihlein (65) and Justin Thomas (67).

Taylor started the day among a clump of contenders, but quickly moved to the forefront with three birdies on the first five holes. And it was his recently-found touch on the greens that helped him rally.

“I just wanted to hit as many greens as possible because I knew I was rolling it really well,” Taylor said.

Taylor earned his PGA Tour card in dramatic fashion less than two months ago by shooting a 63 in the final round of the Web.com Tour Championship at TPC Sawgrass.

The course gave up some low scores on Sunday thanks to ideal cool and windless conditions. Taylor was among the lowest and by the end of the day, he was holding the Sanderson Farms trophy, which is a bronze rooster. Sanderson Farms, the tournament sponsor, produces chicken products.

Stephen Ames, a naturalized Canadian citizen from Trinidad and Tobago, won a PGA Tour event in 2009.