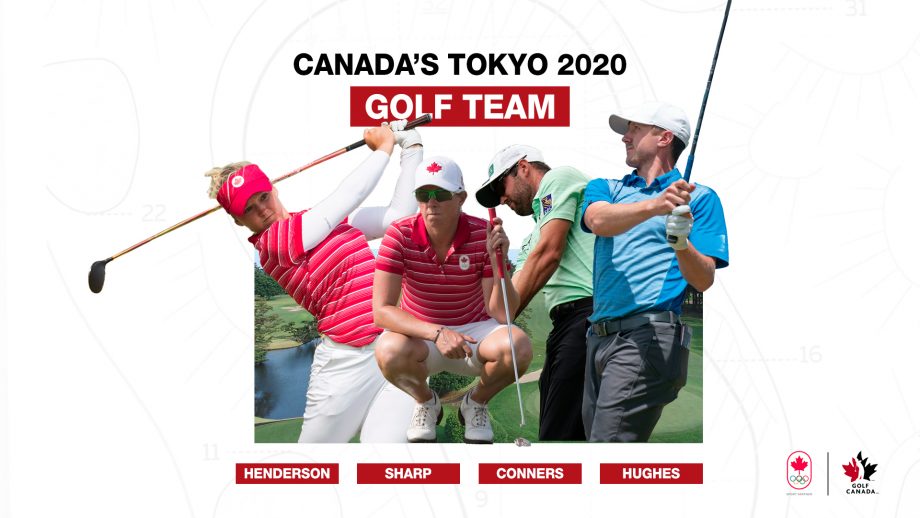 Brooke Henderson of Smiths Falls, Ont. and Alena Sharp of Hamilton, Ont. will comprise the women’s team competing in their second Olympic Games, while Corey Conners of Listowel, Ont. and Mackenzie Hughes of Dundas, Ont. will represent Canada in the men’s Olympic golf competition.

Henderson is a 10-time winner on the LPGA Tour and is currently the 7th ranked golfer in the world. The 23-year-old holds the record for most professional golf wins by a Canadian and has earned 59 career top-10 finishes since joining the LPGA Tour in 2015. A former world no. 1 ranked amateur and Canadian Women’s Amateur champion, Henderson is a graduate of Golf Canada’s National Team Program and represented Canada at numerous international competitions including the 2012 and 2014 World Amateur Team Championships as well as the 2014 World Junior Girls Championship. Henderson honed her game at the Smiths Falls Golf and Country Club and is also a proud member of the Ottawa Hunt and Golf Club.

Sharp qualified for her second Olympic Games as the 136th ranked player in the world. The 40-year-old has earned 14 career top-10 finishes since joining the LPGA Tour in 2005 and finished 30th at the Rio 2016 Olympic Games. A two-time winner of the PGA of Canada Women’s Championship, Sharp has represented Canada at a number of events including the 2000 World Amateur Team Championship and the 2008 World Cup. Sharp is also a proud member of the Brantford Golf and Country Club.

“One of the greatest thrills for an athlete is to represent our country at the Olympics and I am extremely proud to now officially be a two-time Olympian,” said Sharp. “I am excited to get to Tokyo to represent Team Canada and challenge my game against the world’s best.”

Conners, who is nominated to his first Olympic Games, is the current 37th ranked golfer in the world. The 29-year-old joined the PGA TOUR in 2018 and has earned 13 career top-10 finishes including a victory at the 2019 Valero Texas Open. A graduate of Golf Canada’s National Team Program, Conners has represented Canada at several international competitions including the World Amateur Team Championship in 2012 and 2014 as well as the 2010 Junior Boys World Cup. Conners honed his game as a proud member of the Listowel Golf Club.

“This is something that I’ve thought about for a long time—I’ve worked hard toward qualifying for one of the spots, and I’m just so proud to be part of Team Canada this summer in Tokyo,” said Conners, who finished T8 at The Masters earlier this season. “I’ve had the opportunity to compete for Canada at different events with the National team over my career but to do it at the Olympics, one of the biggest stages in sport along with Mac (Hughes) and the rest of the Team Canada athletes is going to be an incredible experience.”

Currently the 65th ranked golfer in the world, Hughes joins his former Kent State college teammate Conners as an Olympic rookie. The 30-year-old joined the PGA TOUR in 2017 and has 12 career top 10s including a victory at the 2017 RSM Classic. A two-time Canadian Men’s Amateur champion, Hughes is a graduate of Golf Canada’s National Team Program and represented Canada at a number of international competitions including the 2012 World Amateur Team Championship. Hughes is a proud member of the Dundas Valley Golf and Curling Club which includes a short course named in his honour.

“Qualifying and competing for Team Canada has been a goal of mine since golf came back into the Olympics and now that its official, it feels like a dream come true,” said Hughes, who recently held a share of the 54-hole lead at the US Open and a past winner on the PGA Tour. “Having the opportunity to compete alongside Corey, a great player, former teammate, and one of my best friends, makes it even more special. I’m also excited for Brooke and Alena and I hope we can all put in a great performance and get Canadian fans excited.”

The Tokyo 2020 Olympic golf competition will take place on the East Course of the Kasumigaseki Country Club. The men’s event will be contested July 29 to August 1 (Days 6 – 9), while the women will compete August 4 to 7 (Days 12 – 15). The field for the Olympic golf competition will include 60 women and 60 men competing over 72 holes of stroke play with no cut. If players in medal positions are tied after 72 holes, a three-hole playoff will decide the medallists before potentially sudden death.

“Covid protocols hushing the crowd at the golf venue should make our golfers feel right at home! I can’t wait to follow the action, led by Brooke, on the links in Tokyo,” said Team Canada’s Tokyo 2020 Chef de Mission, Marnie McBean.

The athletes nominated are:

The coaches nominated are:

Prior to being named to Team Canada, all nominations are subject to approval by the Canadian Olympic Committee’s Team Selection Committee following its receipt of nominations by all National Sport Organizations.

“Brooke, Alena, Corey and Mackenzie have become heroes in our sport—they embody the Olympic spirit and I know how important it was for each of them to be part of Team Canada,” said Golf Canada CEO Laurence Applebaum. “As the National Sport Organization and proud member of the Canadian Olympic Committee, we are extremely pleased with how golf has become a high focus sport for the Olympics, and we look forward to watching these talented athletes take on the world’s best.”