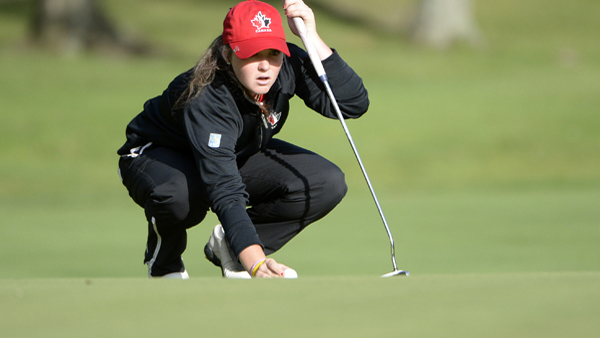 “Golf Canada is delighted to return to Victoria to host our opening event of the season,” said Golf Canada tournament director Cam Crawford. “The field at Bear Mountain is going to be exceptionally strong with some of Canada’s top junior competitors in the field and it should prove to be an exciting championship.”

On the junior girls side, Team Canada’s Development squad will be led by 2013 CN Future Links Western champion Sabrine Garrison, 17, of Calgary, alongside the reigning 2013 CN Future Links Prairie Champion, Jaclyn Lee, 17 from Calgary. Valérie Tanguay, 18, of St-Hyacinthe, Que., and Naomi Ko, 16, of Victoria will also represent the squad in the season opening event.

The Bear Mountain Golf Resort was designed by Jack Nicklaus and previously hosted the Telus World Skins Game in 2010 where Mike Weir, Fred Couples, Ian Poulter, Retief Goosen and Camilo Villegas dueled it out over two days for charity.

“With new ownership increasing its investment in all aspects of Bear Mountain we are working towards our goal of becoming the finest residential resort community in Canada. We are proud to be able to host the best Canadian young golfers here at Bear Mountain and work with Golf Canada to grow our great game,” said Jordan Ray Director of Golf at Bear Mountain Resort.

In 2013, Team Canada’s Kevin Kwon of Maple Ridge, B.C. captured the Junior Boys title at the CN Future Links Pacific Championship at Crown Isle Resort in Courtenay, B.C., while Brooke Henderson grabbed the 2013 CN Future Links Junior Girls title. Neither will be in the field this year at Bear Mountain.