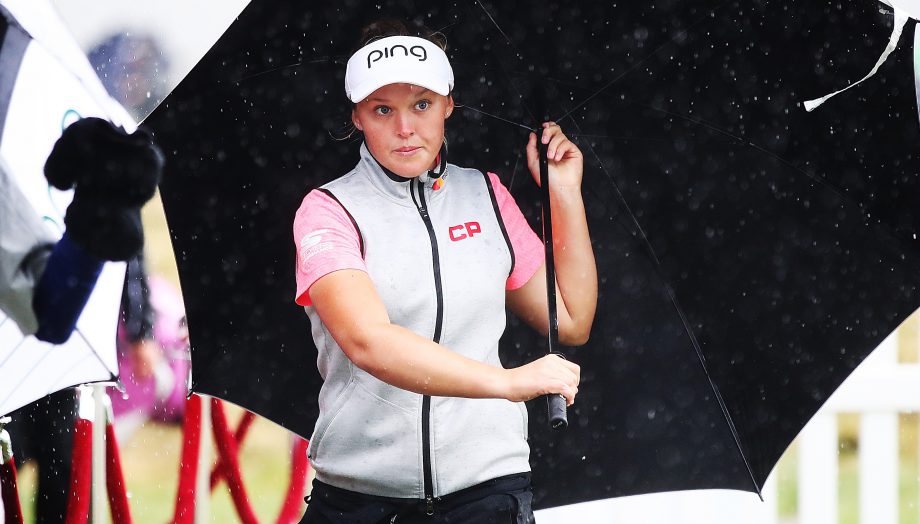 AUCKLAND, New Zealand – Canadian Brooke Henderson took a big step towards her fifth LPGA Tour title in only six holes on Sunday, but will have to resume on Monday after rain, lightning and dangerous winds disrupted the final round of the New Zealand Women’s Open.

The 20-year-old from Smiths Falls, Ont., leads the tournament by four shots at 17-under par from overnight leader Belen Mozo of Spain and American Brittany Lincicome.

Play was repeatedly suspended Sunday because of adverse weather conditions and finally called for the day at 5:30 p.m. local time when a violent squall brought heavy rain and winds which sent advertising boards flying across greens.

Tour officials ruled the tournament would remain 72 holes and players will return to the Windross Farm course Monday to complete their final rounds.

Henderson was 3-under Sunday after her six holes. She birdied the second, fourth and fifth holes to move past the faltering Mozo, who was 2-over after six holes when a trying day finally ended.

Lincicome was 2-under after six holes, with birdies at the second and fifth, and loomed as Henderson’s most likely challenger Monday.

Mozo, who led the tournament by five shots after the second round and by one entering the final round, struggled on the greens Sunday and had bogeys on her first and sixth holes to concede the lead to Henderson.

Norway’s Nicole Broch Larsen and China’s Jing Yan are tied for fourth place at 12-under after nine and seven holes respectively. Australia’s Su Oh was next at 11-under through nine holes while Hee Young Park of South Korea and Thidapa Swannapura of Thailand share seventh place at 10-under.

Hometown favourite Lydia Ko was 1-under after nine holes and tied for ninth place at 9-under, eight shots off Henderson’s lead.

Tournament organizers and LPGA officials were aware of the threatening forecast for Sunday and made provision by bringing forward tee times, hoping to avoid the worst of the weather, which was expected to hit late afternoon.

The first players were off at 7:40 a.m. and the leaders had just teed off at 10 a.m. when rain and standing water forced play to be suspended for the first time.

Players returned to the course at 12:28 p.m. and almost two hours of play were possible before play was suspended again because of the threat of lightning.

Play resumed at 4:55 p.m. but had only continued about 20 minutes before the final, fierce squall spread across the course bringing lashing rain, gale force winds and bitterly cold conditions.