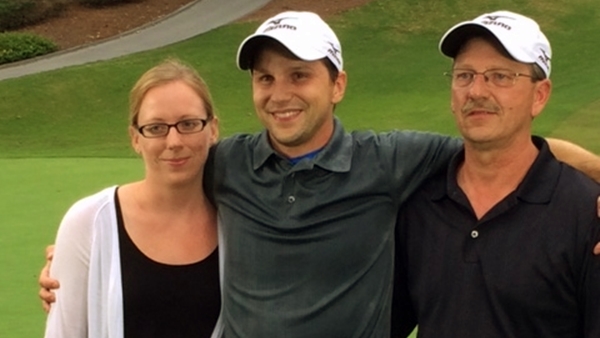 NORCROSS, Ga. – Edmonton’s Tim Buckland capped off six months of “playing famously” by capturing the 2014 Mizuno JPX Invitational championship title. The tournament marked the culmination of the second year of Mizuno’s “Play Famously” campaign at Country Club of the South in Johns Creek, Ga. Highlighted by a back-nine run that featured back-to-back birdies on 13 and 14, Buckland netted an impressive 68 (gross 82) for an eight-shot victory.

Although it was his first “pro” tournament, Buckland displayed the poise and shot-making skills of a tested PGA Tour professional.  Playing the JPX-EZ irons, JPX Series Wedges, and JPX-EZ Woods, Buckland’s accuracy off the tee allowed him to attack the course’s plush greens with consistent iron play. Buckland’s strongest competition came from Joe Bracamonte, a middle-school principal and 16-handicapper from Fresno, Calif. and Opera singer and 17-handicapper Eric Berry of New Haven, Conn. Both finished the tournament at net 4-over 76.

“What an incredible end to an amazing experience with an amazing group of people. Being treated like a pro by Mizuno for the past six months has been something I’ll never forget,” said Buckland. “I definitely came determined to play well, but to get the win is something really special. It’s been an honor to be among so many people who love the game of golf like I do and have made it through so many incredible and unique challenges.”

“Giving amateur golfers across the country a platform to tell their story is something Mizuno has been proud and honored to do,” said Iver Maple, Division Brand Marketing Manager, Golf, Mizuno USA. “The power of golf has been on display in the lives of the 2014 members of Team JPX, and we’ve been fortunate to associate our brand with such a wonderful group of people.”

“Congratulations Tim Buckland and the 11 other 2014 members of Team JPX. What an incredible display of talent and commitment to the game of golf in North America. You are all an inspiration!”, said John Stacey, President of Mizuno Canada Ltd.