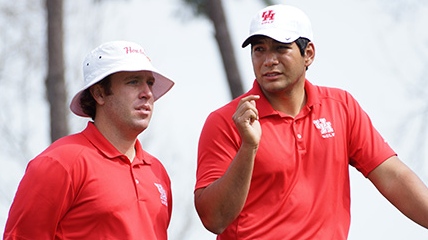 On Tuesday, the Golf Coaches Association of America (GCAA) announced that Chris Hill, coach at University of Houston, has won the Jan Strickland award, given to the top assistant coach in Div I, II or III golf.

Hill has become the first Canadian to win the award in its 12-year history.

“When I started coaching, I only dreamed that someday I would be included in the ranks of coaches even considered for such an honour,” Hill told UHCougars.com.

The award focuses on the coach’s ability to excel in working with athletes both on the course and in the classroom. Hill, a Sarnia, Ont., native, modestly credited his University of Houston athletes.

“My most important thank you goes to all my players, past and present, because without them this award was never even a possibility,” he continued.

Coach Hill has extended his Canadian roots into the recruiting system at the University of Houston. In his four years, Hill has been involved in the recruiting and coaching of three Team Canada athletes – Blair Hamilton (Burlington, Ont.), Matthew Scobie (Ajax, Ont.) and current Development Squad member Matt Williams (Calgary).

HUGE congrats @UHCoachHill for winning assistant coach of the year!! Great friend and a great member of @UHCougarGolf #WellDeserved #Canuck

In addition, Hill and the Houston Cougars have successfully added Tony Gil of Vaughan, Ont., to their recruitment class of 2016. Gil, 16, is new to Canada’s Development Squad this year and verbally committed to the University of Houston earlier this month.

“Chris has been instrumental in establishing the great connection that we have with the University of Houston,” said Ratcliffe. “A handful of Canadians have truly excelled under his direction and I really look forward to what the future holds under his leadership.”

Hill has helped the Cougars jump to their current spot of No. 9 in the NCAA Div I Men’s Golf rankings. Away from the golf course, the Cougars achieved their highest ever cumulative grade-point average (GPA).