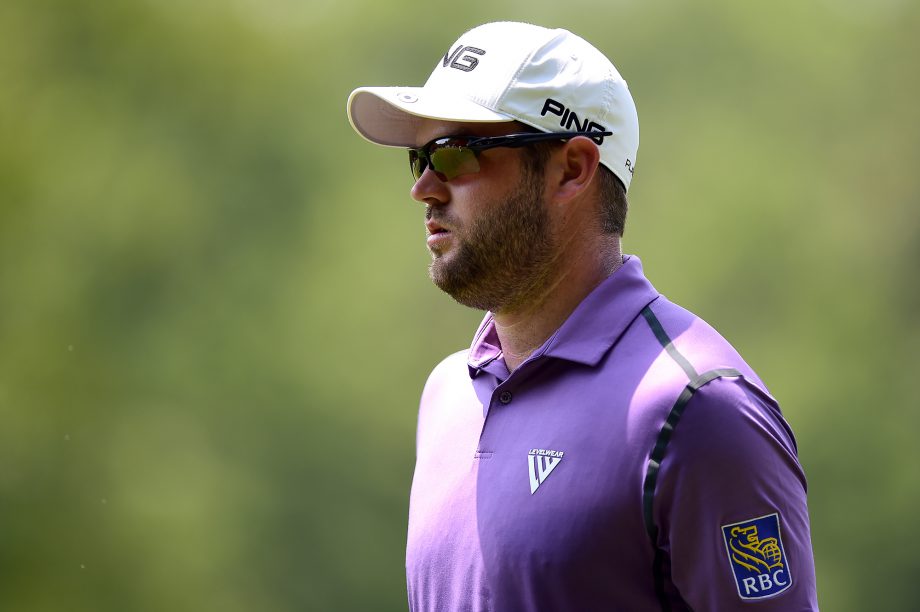 JERSEY CITY, N.J. – Troy Merritt isn’t obsessed with his position in the FedEx Cup and what he needs to advance in the PGA Tour’s post-season. He figures the best solution is good golf, and he delivered his best round of the year Thursday in The Northern Trust.

Merritt began with a 10-foot par save, followed with a pair of 20-foot birdie putts and took advantage of calm, rain-softened Liberty National by tying the course record with a 9-under 62 for a one-shot lead over Dustin Johnson.

It wasn’t a career low – Merritt twice has shot 61 on the PGA Tour – but it might have been his best round hardly anyone saw.

The storm was so fierce on the eve of the FedEx Cup playoffs opener that the public was not allowed in until 10 a.m., nearly three hours after the round began. And when the fans arrived, most of them were watching the action – what little there was – two groups behind him with Tiger Woods.

Woods, in only his third round since the U.S. Open, made double bogey on the shortest hole on the course, three-putted from 15 feet and had three bogeys from the fairway in a listless round of 75. Along with being 13 shots out of the lead, he was in danger of missing the cut for the first time in the FedEx Cup playoffs, which also would jeopardize a return to East Lake for the Tour Championship.

“We all knew it was soft out here with the rain last night,” Woods said. “I knew I had to go get it, post a low one, and didn’t do it. It’s certainly out there. Greens are soft. Fairways are soft. You can play aggressively and not have any real ramifications for playing aggressive.”

Johnson ran off four straight birdies near the end of his round for a 63, a good start in a tournament he already has won twice.

Kevin Kisner and Jon Rahm were at 64, while the group at 65 included Rory McIlroy and the suddenly hot Webb Simpson, who posted his sixth straight round of 65 or better dating to the final round of the FedEx St. Jude Invitational two weeks ago.

Corey Conners of Listowel, Ont., was the top Canadian at 5-under 66, one shot ahead of Adam Hadwin of Abbotsford, B.C.

Roger Sloan of Merritt, B.C., and Nick Taylor of Abbotsford were at 3-under 68, while Mackenzie Hughes of Dundas, Ont., was at 2-over 73.

The wind arrived in the afternoon, slowing the onslaught of low scores, with no round better than the 66 by Justin Rose.

“Got a bit tricky this afternoon,” Rose said. “I didn’t pay too much attention to this morning’s scores. Saw a scoreboard at one points – 9 (under), 8, 7s, 6s – and I knew it was on. This golf course, if you’re playing well, you can take it on and challenge it. … If you’re not 100 per cent on your game, you have to play conservatively.”

Merritt is No. 72 in the FedEx Cup, with the top 70 advancing next week to the BMW Championship at Medinah. Points are quadrupled in the post-season.

“I know good golf will take care of itself,” he said. “You just try to play the best you can. Obviously, I’ll be watching throughout the weekend, but just getting off to a good start, put that to the back of the mind and try to win a golf tournament.”

Johnson has no such worries as the No. 7 seed, though this time of the year means a lot to him only because of past failures. The FedEx Cup isn’t the same as winning a major championship, and Johnson has gone three years since his lone major at the 2016 U.S. Open.

He narrowly lost out on the FedEx Cup in 2016 when he had a share of the 54-hole lead, shot 73 and still could have won the cup if anyone but McIlroy had won. McIlroy won in a playoff. Four other times he went to the Tour Championship among the top five seeds and didn’t get it done.

“Absolutely – especially with what they’re paying this year,” he said with a smile, referring to the $15 million payout. “That’s like winning five majors.”

His math was a little off, but point taken – his interest level is high, and his game was sharp. Even with a 63, Johnson couldn’t help but recall four birdie putts of inside 10 feet in a five-hole stretch around the turn that didn’t fall.

Brooks Koepka, who has won four majors in the last three years, still hasn’t found his groove in the FedEx Cup. Koepka is the No. 1 seed. In 15 playoffs events, he has managed only two top 10s – his best is sixth place at the Tour Championship two years ago – and he didn’t get off to a great start at Liberty National with only three birdies in his round of 70. Either way, he’s assured of being in East Lake.

That isn’t the case for the likes of Phil Mickelson at No. 34, who opened with a 72. And it’s never been this big of a struggle for Jordan Spieth, who is No. 69 and can’t even bank on next week. He played bogey-free for a 67 in the afternoon.

“I don’t like starting where I did this playoffs, and I don’t plan on ever starting this far down again,” Spieth said before he paused to smile. “Last year I said that, and then I did. But things are improving. Today was a good day.”