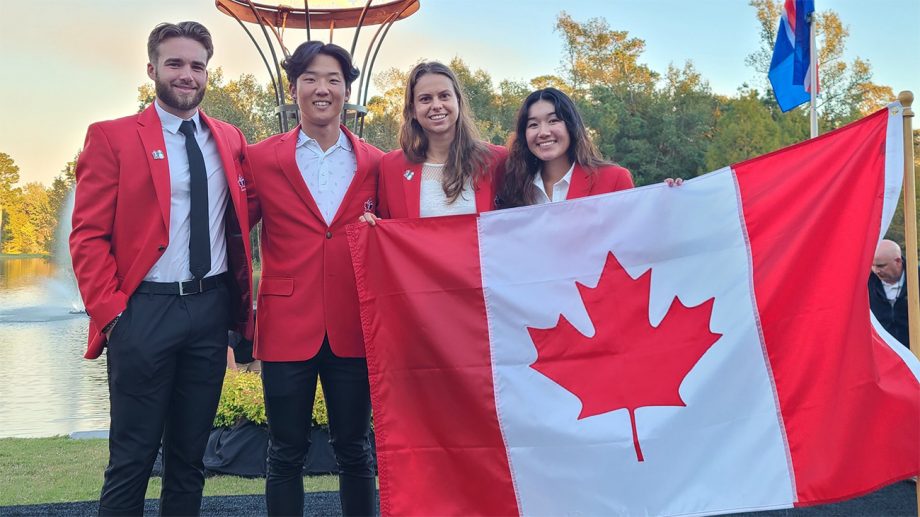 TRINITY, Texas – A pair of Canadians made their mark south of the border in Saturday’s final round of the Spirit International at Whispering Pines Golf Club.

Johnny Travale of Stoney Creek, Ont., led the way for the Canadians in the men’s division. The 20-year-old held the lead for the opening two rounds and closed with a solo third finish at 3 under par (67-71-75). Teammate Henry Lee of Coquitlam, B.C., finished the stroke play event at 2 over par — good for a ninth place tie.

Collectively, the Canadian men finished alone in third place with a combined score of 431 (137-143-151). Pacing the group were the Swedes, who finished two strokes ahead at 3 under par, followed by the Americans at 2 under.

In the women’s division, former Drive, Chip & Putt champion Savannah Grewal impressed with a third place finish. The Mississauga, Ont., native played a consistent tournament with rounds of 71-69-71 to close at 5 under par. Fellow countrywoman Noémie Paré of Victoriaville, Que., finished in a tie for 27th at 15 over par.

Together the women finished in sole possession of sixth place at 10 over par collectively. The United States took home the title, followed by Switzerland in second and France in third.

In the combined event, Canada finished in second place behind the United States with a score of 7 under. The 54-hole competition combined each country’s top-three scores from each round of play, with the high score being discarded.

Coach Salimah Mussani accompanied the teams in Texas and was more than pleased with the results.

“We’re very proud of what this group accomplished this week in such a prestigious event on the calendar,” said Mussani, a PGA of Canada Class ‘A’ member. “There are many positives to build on and we can’t wait to get back to work to keep striving for strong results across the board.”

The event featured world-class amateurs from over 20 countries across six continents. Conducted at the Whispering Pines Golf Club since its inception in 2001, the Spirit is a biennial event alternating years with the World Amateur Team Championship. The Spirit is hosted by the World Health & Golf Association, a charitable organization dedicated to promoting amateur golf for the benefit of health related reasons.