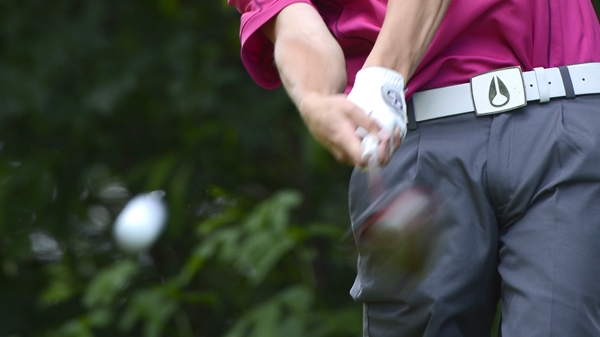 Two years ago, junior golfer Dustin Barr began chemotherapy for two tumours, but he continued to practice every day and compete in the sport he loved. His will to win helped him beat cancer.

Over the weekend, the 19-year-old native of Thunder Bay, Ont. won his first junior tournament in Florida against a field of the top young players from around the world.

Barr went wire-to-wire in shooting consecutive scores of 71 to win the Boys 15-19 division of the Future Collegians World Tour event at Saddlebrook Resort in Wesley Chapel, Fla.; he was two strokes clear of Marcos Montenegro of Argentina. Following the victory, Golfweek magazine recognized Barr as Junior Boys Player of the Week.

“I’ve worked really hard to get where I am right now. This means a lot,” said Barr, whose dreams of a NCAA college scholarship and playing on the PGA Tour never wavered even after the two cancerous tumors were found – one in his pancreas and another on his hip – in March 2013.

At the time, doctors said Barr required surgery to remove a part of his pancreas, as well as, a hip replacement. Barr underwent seven rounds of chemotherapy over the course of the next five months, but his Thunder Bay coach Dustin Wilson said Barr “played golf everyday and you’d never know he had cancer.”

After a golf trip to Scotland with Wilson that included his “wish” round at The Old Course at St. Andrews in Scotland arranged by the Children’s Wish Foundation, Barr continued chemotherapy; he competed through exhaustion and loss of hair from his treatments. After returning to Canada, Barr underwent 16 hours of surgery, after which the doctors declared the tumors dead and his hip saved. He immediately began a physiotherapy program to rebuild his strength.

This past January, Barr was strong enough to enroll at Core Golf Academy in Orlando. He is now working hard on his game with coach Nick Duffy, competing and hoping to catch the eye of an NCAA college coach.

In Thunder Bay, his mother Leanne said the family was overjoyed at Barr’s progress. “We have cleared the avalanche and now just have to get to the top of that mountain.”

Jeff Hay, Core’s Director of Golf, said Barr’s victory has thrilled everyone connected with the academy and demonstrated the young man’s grit and determination.

“It’s tremendous how Dustin has overcome such odds and continued to pursue his dream,” Hay said. “Because of his illness, he really hasn’t played many tournaments against top competition, which makes his win all the more incredible.

“With this victory and beating cancer, I think it sets Dustin up to attract attention from some college coaches. Wouldn’t any coach want a fighter like this guy?”