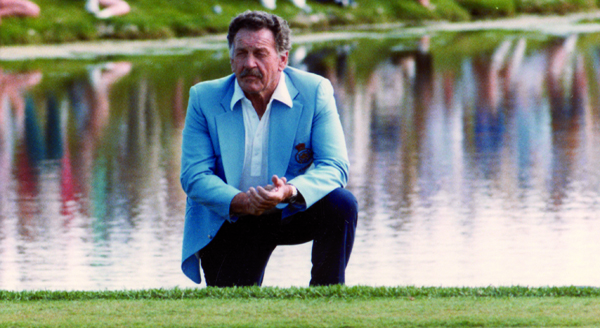 It is with great sadness that Golf Canada, the Canadian Golf Hall of Fame and the entire golf community mourns the loss of Richard (Dick) Grimm, who passed away on May 26, 2014 at the age of 91.

Born April 29, 1923 in Chicago, Illinois, Dick Grimm was affectionately known as ‘Mr. Canadian Open’ during his involvement with Canada’s National Open Championship from 1965 to 1993. One of Canadian golf’s finest ambassadors, Grimm put his heart and soul into the game, giving much of the credit for his own success to the thousands of volunteers that he believed were the driving force in Canadian golf.

“On behalf of the entire golf community including the golfers, associations, sponsors, employees and volunteers whose lives he touched, we are extremely saddened by the passing of Dick Grimm,” said Golf Canada CEO Scott Simmons. “Dick’s contributions to the game of golf were outstanding and his legacy will forever live on as a leader, a gentleman, a mentor, a supporter of the game and one of the finest ambassadors Canadian golf has ever known. Although it’s a sad day for Canadian golf, his friends and his family, we join in celebrating the life and the many deserving accomplishments of ‘Mr. Canadian Open’.”

In 1993, Grimm was inducted into the Canadian Golf Hall of Fame and since that time has been acknowledged with countless awards, honours and accolades across sport and Canadian golf.

Along with (former RCGA governors) Bruce Forbes and John Marshall, Grimm worked with Genstar Corporation to build Glen Abbey Golf Club in Oakville, Ont. and establish it as the home of the Canadian Open from 1977 to 2000. He was a key driver behind retaining golf legend Jack Nicklaus as the architect, Jack’s first solo design.

He also worked closely with the Leonard Shore Foundation to bring about the building of the Canadian Golf Hall of Fame, located on the grounds of Glen Abbey Golf Club.

After retirement, he continued to be very active in the game, serving on a number of committees with the RCGA and the Golf Association of Ontario while also representing local golf courses and staying actively involved with the Golf Historical Society of Canada. His many awards and recognition includes being a member of the Captain’s club at the Memorial, a member of the Ontario Golf Hall of Fame and the Oakville Sports Hall of Fame.

His wife, Karen, has been a true companion for their 40 year marriage, working with him at the Canadian Open and tirelessly assisting him through his recent illnesses and passing.

A memorial service will be held on Friday, May 30th at 12:30pm at Temple Har Zion on Bayview Avenue in Thornhill, Ont.