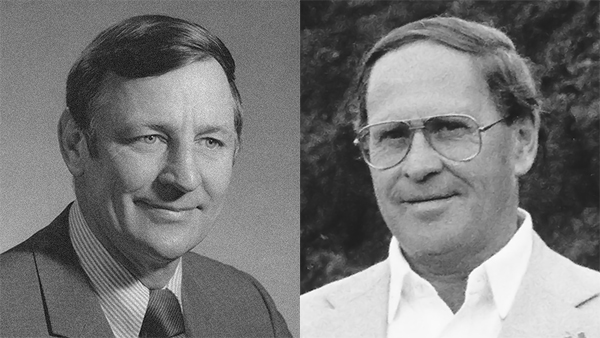 While Bruce’s education afforded him a career in his chosen path and the means by which to pursue his dreams, it was his dedication to golf that afforded him a lifelong passion – one which would see him become president of the RCGA in 1978.

The long-time member of the Calgary Golf and Country Club is survived by his loving wife of 66 years, Shirley (nee Atkinson); their three children Colleen, Robert and Kim; as well as, six grandchildren and four great-grandchildren. Bruce was predeceased by daughter Lyndsay Jean in 1984.

By his family’s request, there will be no funeral service. Cremation has taken place and a gathering in Bruce’s memory is planned for later in the year. Messages of remembrance are welcome and may be left for the family at www.southcalgaryfuneralcentre.ca.

Four days following the passing of Bailey, Canadian golf would lose another cherished member in 1987 president Thomas P. Wood. Born on June 13, 1927, Thomas led a dedicated life of service in sports, government and the private sector. It is perhaps the confluence of these roles that led him to one of his proudest achievements, when he and a group of likeminded individuals conceived of, and successfully lobbied for, the creation of the picturesque Kananaskis Country Golf Course.

The founding member of the Derrick Golf and Winter Club leaves behind wife Verlie and their three children: Lindsay Redpath (Bryan), Meredith Adams (Garry Scheuerman) and Michael Wood, as well as, two step-sons, Bill Piers (Susanne) and Michael Piers (Julie). The beloved family man will be remembered fondly by his six grandchildren.

At Thomas’s request, there will be no service. His ashes will be spread at a later date in Alberta’s Kananaskis Country. In lieu of flowers, donations can be made in Thomas’s name to the Alberta Cancer Foundation, the Heart and Stroke Foundation, or the Children’s Hospital Aid Society. Condolences may be forwarded to the family via www.mcinnisandholloway.com. In living memory of Thomas Wood, a tree will be planted at Fish Creek Provincial Park.

The commitment and service that R. Bruce Bailey and Thomas P. Wood demonstrated to golf in Canada exemplifies the best of what sport is capable of developing in any individual. Leadership. Passion. Dedication. Perseverance. These are the characteristics by which these men led their lives and guided their sport’s national governing body; in their passing, these are the characteristics for which they will be remembered, cherished and honoured.