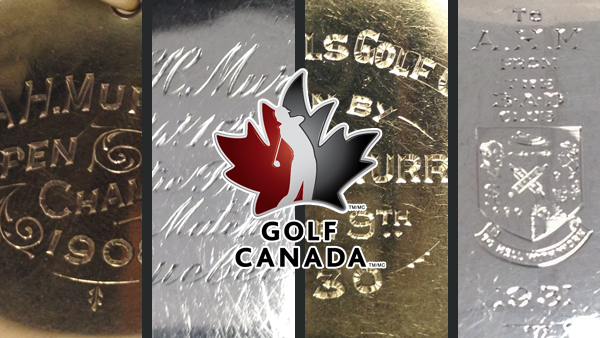 The lasting legacy of Albert H. Murray has taken its rightful place alongside a number of the nation’s most prized and treasured items celebrating Canada’s storied history with golf. Ian Murray has generously donated a number of his grandfather’s keepsakes to the Canadian Golf Hall of Fame and Museum in an effort to share the past of one of the country’s golfing greats.

“Albert has had a tremendous impact on the sport of golf in Canada and we are thrilled to add these pieces to our collection in recognition of his many successes,” said Meggan Gardner, curator of the Canadian Golf Hall of Fame and Museum.

In the summer before his 21st birthday, Murray would parlay his passion for the sport and his skill on the course into his first of two Canadian Open Golf Championships – he remains the youngest player to win the event. The 1908 gold medal commemorating the victory is among the memorabilia that is now housed in the Hall of Fame. A total of three gold medals – including those from the 1924 CPGA Championship and the 1930 NHL Pro-Am Tournament in Montreal – highlight the collection donated by Albert’s grandson Ian.

The newest additions join the younger Murray’s previous contributions – a pair of priceless scrapbooks amassing the accolades of Albert and his brother Charles. The Hall of Fame siblings were pioneers of the sport and their gifts to the game go beyond their exceptional play.

The two were founding members of the Canadian Professional Golfers Association in 1911. The following year, Albert would go on to become the organization’s first president. The brothers changed the very landscape of the game having designed or re-modeled the layouts of over 50 courses in Canada and the United States.

Additional information regarding the Canadian Golf Hall of Fame and Museum can be found here.