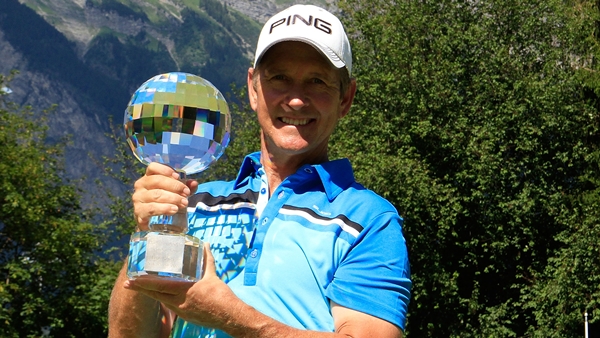 The Calgarian took a four shot lead over Ross Drummond into the final round and was unwavering, carding six straight pars before making his first birdie of the day at the seventh hole.

Gibson then set about adding to his lead with birdies on hole Nos. 8, 11, 13, 14 and 16, eventually carding a four under par 66 for a 195 total and a six shot victory over Denis O’Sullivan of Ireland.

“It hasn’t all sunk in yet,” said Gibson. “It’s kind of surreal, I just tried not to think about winning until I hit the green on the 18th, and then I started to relax and take it in. I didn’t want to do anything silly.

“This is actually the first week that I can think of when I didn’t get angry at all. I didn’t play my best golf all the time, but stayed totally calm and in control of my emotions, which was key.

“It’s just a shame my mom wasn’t here to see it, as we sadly lost in March. She was my number one supporter and would have loved to have seen this, but I’m sure she was watching down on me from somewhere.”

Gibson’s win means he receives a winner’s cheque for €42,000, and an automatic qualification spot at The Senior Open Championship Presented by Rolex in Wales later this month.

The 52 year old, who now sits sixth on the Senior Tour Order of Merit, might be one to watch when the year’s third Major gets underway at Royal Porthcawl on July 24.

“This win doesn’t change my plans, it just gives me more confidence going into Porthcawl and means I don’t have to qualify. I’m actually going out there later this week to get a round or two in. I just want to keep going and hopefully have some more fun during the rest of the year.”

Gibson is planning a personal celebration.“It might be hard to celebrate as my family are spread all over the globe,” said the new Bad Ragaz PGA Seniors champion. “But, I’m going to have a Skype call with my dad a little later – he’s having a party back home in western Canada, so I can have a beer while I’m doing that.”