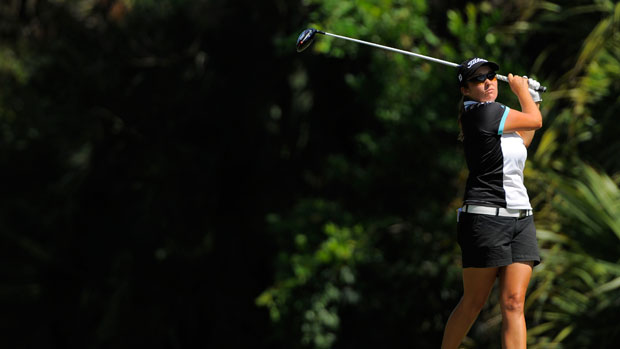 EL DORADO, Ark. – On a day when the field average was 77.04, Sara-Maude Juneau (Quebec, Canada) fired a stellar, 69, to take a one shot lead at the Murphy USA El Dorado Shootout Presented by PepsiCo at Mystic Creek Golf Club.

Play was suspended due to darkness at 7:35 p.m. with eight players still out on the course. Second round play will resume tomorrow at 7:45 a.m. and the final round will begin no earlier than 9:00 a.m. from split tees. Leaders will tee off last from the first tee.

“I’ll have to think about it a little bit,” Juneau said about her game plan going into the final round. “I was in this exact position a few weeks ago. I’ll think about it tonight. I don’t know it’s just going to be keep griding it out. What I learned two weeks ago is that I don’t have any control over what any of the other girls do. Someone shot a really low round when I was leading so I’ll just have to stay patient.”

Juneau birdied three holes en route to a bogey-free round, the lone bogey-free round of the week at Mystic Creek. The Louisville grad, who sits at 2-under for the tournament, has some extra support this week in the form of a caddie who used to play on Tour.

“My friend Laura Nochta is on the bag,” Juneau said. “She actually played on this tour for a while and she lives in Arkansas now and it worked out that she could come and caddie so it’s been fun.”

Chasing Juneau down will be Jackie Stoelting (Vero Beach, Fla.) who is a shot back at 1-under 143 and Heather Bowie Young (Ft. Worth, Texas) the first round leader who is two back at even par.

“It’s been really solid,” Roth said of her play. “I have all of my coaches here today and we had a good talks before the round. I just really kept it simple out there. I didn’t really try to fight for birdies out there because you can’t really do that on this course. You’ve got to play smart and I feel like I did that for the most part.”

Roth, who still needs to finish her 18th hole tomorrow morning, had a large contingent of UCA friends and fans following her throughout her round.

“It was awesome,” Roth said with a smile. “On the front nine, the whole team was actually out there. I know they’re really close to me. For me, living over here, with a lot of my family and friends back in Sweden, this feels like playing at home for sure. It was awesome out there.”

JACKIE STOELTING BACK ON SYMETRA LOOKING TO REGAIN CONFIDENCE

Jackie Stoelting (Vero Beach, Fla.) is one of only two players to sit under par heading into the final round of the Murphy USA El Dorado Shootout Presented by PepsiCo.

“I’ll take it,” Stoelting said with a smile. “It’s a tough course. It’s a really good golf course. It reminded me a lot of what I played this year out on the LPGA. I think being out on the LPGA prepared me to play a course like this really well.”

Stoelting, who finished third last season on the Volvik Race for the Card money list to earn her LPGA Tour card and competed full-time on the LPGA this season, shot a second round 70 (-2) to move from T13 into solo second.

“It’s really about the greens,” Stoelting explained. “The greens are sloped and you need to know how to hit on them but it’s also placement off the tee so you can give yourself a good shot into the green. You can’t be scared out there because it’s really easy to be scared on these greens. You’ve just got to play your game and hope the putts fall but the greens are running so well and so smooth to where if you feel like you can make a putt then you will.”

While Stoelting didn’t have the season she would have envisioned out on the LPGA she is hoping that a few tournaments on the Symetra Tour will give her confidence going into the final stage of LPGA Qualifying School in December.

“It was a long year and a tough tough year,” Stoelting admitted. “I learned a lot of patience. The scores out there are so low every week. Out there, I made a lot of silly mistakes and didn’t make enough birdies to offset the bogeys and that’s what the great thing is about today. If I can have a double and shoot 2-under. I’ll take that every day. I think that was my problem on the LPGA is that I’d make mistakes and then put pressure on myself like ‘ oh my gosh I just made a bogey I’ve got to make a birdie’. I didn’t play my game like I did last year out here where I never thought about the cut line and out on LPGA I thought about the cut line too much. I’m playing a couple of events out here to get my confidence back and know that it wasn’t just a fluke that I made it. I know I’m a good player. I just had to learn a lot out there.”

Sponsor invite Ally McDonald (Fulton, Miss.) Remains in the hunt at 1-over par through two days at the Murphy USA El Dorado Shootout Presented by PepsiCo.

“I try not to get numbers in my head but starting out this tournament I knew with the golf course how it is that anything around even par would leave me in contention,” McDonald explained. “I’m really happy with how I played other than one hole. Definitely have a lot positives going into tomorrow.”

McDonald, who is competing in her first event on the Symetra Tour, tallied three birdies, three bogeys and a triple on her way to a second round 75 (+3).

“When you’re playing and are in contention nothing really changes,” McDonald admitted. “Especially out here you can’t start firing at pins because that’s when you get into a lot of trouble. Tomorrow nothing really changes. I’ll just continue to put the ball in a good place off the tee and then use good strategic planning in my approaches and hopefully get some putts to drop.”

While she sits only three strokes back of Sara-Maude Juneau don’t expect the Mississippi State grad to stress too much about anything other than the Bulldog’s game at Auburn.

“I’m going to hit a few balls, hit a few putts and then watch some college football of course.”

El Dorado native Amanda McCurdy may have missed the cut at the Murphy USA El Dorado Shootout Presented by PepsiCo at Mystic Creek Golf Club but she enjoyed being back in her hometown.

“I get here maybe once a year so it’s pretty exciting,” McCurdy said. “I work pretty hard on my businesses trying to build my instruction program and I’m really proud of that. To be able to come back here, I don’t think anyone expected me to win anything, so I hope that I respected the game and showed respect to those around me while I enjoyed being here for a few days.”

“I didn’t expect a lot of great golf from me,” McCurdy admitted. “I teach seven days a week so I knew the expectations weren’t incredibly high especially coming to a course that’s this type of challenge. I was more so here for being around the community of El Dorado and giving support to the event. I was walking up the last tee and couldn’t believe that eight years ago there would be a Symetra event here and it’s very crazy that there is and I’m so proud of everyone who did all of the work for it.”