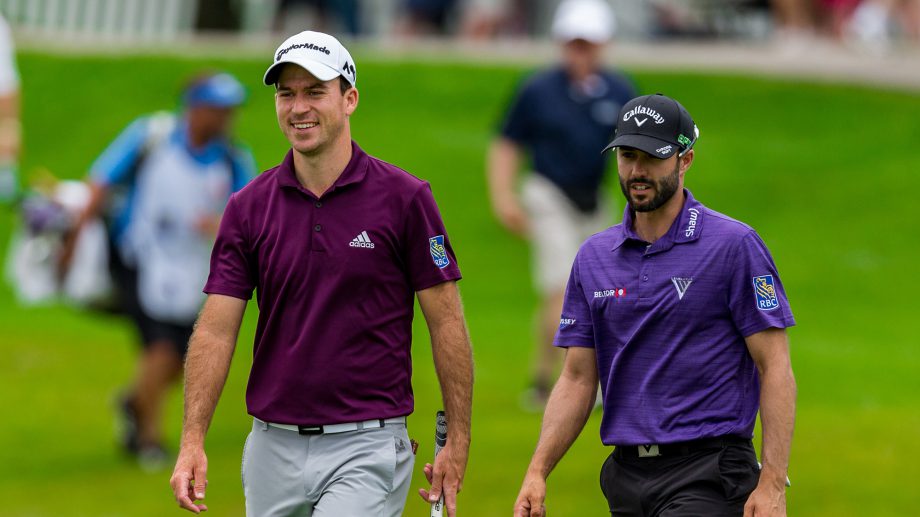 OAKVILLE, ON - JULY 27: Fellow Canadians Nick Taylor (CAN) and Adam Hadwin (CAN) walk onto the green during first round action of the RBC Canadian Open on July 27, 2017, at Glen Abbey Golf Club in Oakville, ON, Canada. (Photo by Richard A. Whittaker/Icon Sportswire via Getty Images)
John Chidley-Hill/ Canadian Press

A friendly east-west rivalry between Canada’s top PGA Tour golfers has been renewed the past two Tuesdays before being set aside for the event itself.

Nick Taylor, Mackenzie Hughes, Adam Hadwin and Corey Conners have practised together the past two weeks as the only Canadians in the field at the St. Jude Invitational and the PGA Championship. Taylor and Hadwin, who grew up playing together at Ledgeview Golf and Country Club in Abbotsford, B.C., have been a team in the practice rounds and Hughes and Conners, who were on Kent State’s golf team, have been a pair.

“We played today and – I like to call us the ‘West Coast Boys’ – we got smoked by the ‘East Coast Boys’ so they definitely had the best chirps today,” said Taylor on Tuesday shortly after leaving the course at TPC Harding Park in San Francisco.

Earlier this summer the quartet made Canadian golf history when they all cracked the top 100 of the world rankings. Hadwin is ranked 60th in the world, followed by Conners (65), Hughes (74) and Taylor (100).

“We’re all routing for each other. If it’s not going to be us that wins, it’d be really exciting if it’s one of our fellow countrymen.”

All four are avid sports fans too and with the NHL resuming its season, the fates of their favourite teams are a hot topic. Hughes, from Dundas, Ont., and Conners, from Listowel, Ont., support the Toronto Maple Leafs while Hadwin is an avid follower of the Vancouver Canucks.

“There wouldn’t be a whole lot of smack talk between us because we don’t really have a lot of smack to talk,” said Hughes with a laugh. “The Canucks haven’t won a Stanley Cup ever and the Leafs haven’t won one in a very long time.

“It’s tough for any of us to have much on each other.”

Taylor is the neutral party in the foursome when it comes to the NHL because he’s always followed the Canucks since he grew up in B.C., but also cheers for the Leafs because his father Jay is a Toronto fan.

“I don’t have a huge allegiance to either team, I just like watching hockey in general,” said Taylor, who noted that spending nights watching TV in their hotels is the norm for pro golfers given the PGA Tour’s strict rules about maintaining a bubble during the COVID-19 pandemic.

The PGA Championship isn’t the only major on schedule that will have four Canadians in the field. Taylor, Conners, and Hadwin will be joined by Mike Weir of Brights Grove, Ont., at this year’s Masters in mid November.

There’s also the possibility of five Canadians being in the field at this year’s U.S. Open. Conners, Hughes, and Hadwin have all qualified to play at Winged Foot Golf Club in Mamaroneck, N.Y., in late September.

Taylor Pendrith of Richmond Hill, Ont., could also qualify for the U.S. Open if he’s in the top five of the Korn Ferry Tour rankings when they’re updated on Sunday. Pendrith, who also played at Kent State with Hughes and Conners, is third heading into this week’s Portland Open.

“To potentially have five guys at the U.S. Open, with Taylor, we’re set up well,” said Hughes. “I’m looking forward to the end of the year and seeing what we can do and hopefully making some splashes in the professional golf scene and keep that Canadian flag flying high.”