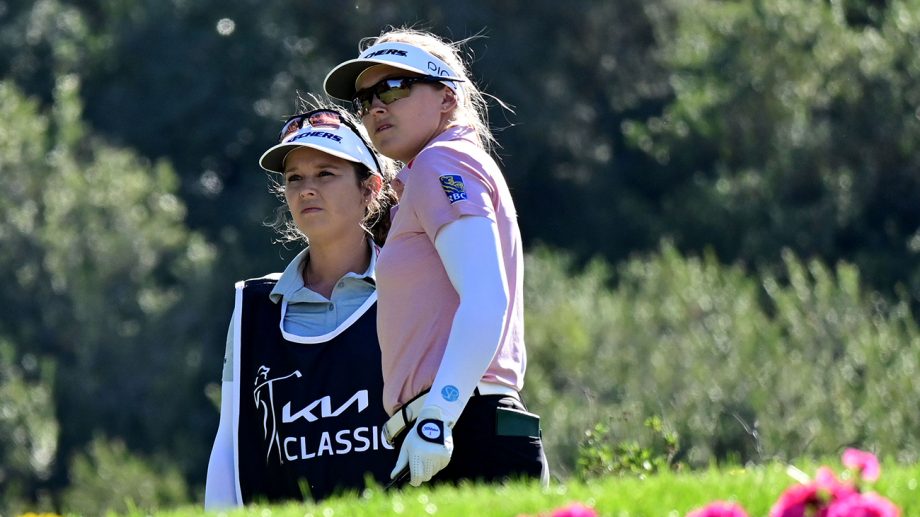 CARLSBAD, CA - MARCH 28: Brooke Henderson of Canada looks on the 14th tee box with her sister and caddie Brittany Henderson during the Final Round of the KIA Classic at the Aviara Golf Club on March 28, 2021 in Carlsbad, California. (Photo by Donald Miralle/Getty Images)
John Chidley-Hill/ Canadian Press

Canada’s top two professional golfers are returning to tournaments this week where they were atop the leaderboard the last time they played in the event.

Corey Conners of Listowel, Ont., won the Valero Texas Open in 2019 and, because the event was cancelled in 2020 due to the COVID-19 pandemic, is considered the reigning champion. As a result, every room key at the players’ hotel for the PGA Tour event this week has his picture on it.

Conners said that although his photo is everywhere at the event in San Antonio, he still enjoyed some anonymity when checking in with a hotel clerk thanks to the mask he was wearing upon arrival.

“She had no idea who I was, but I made a funny comment about it being embarrassing for the guy who’s got to look at himself on the room key every day for the whole week,” Conners said this week.

“I obviously had my mask on and a hat and I think a sweatshirt, so she probably didn’t put two and two together.”

Conners won in 2019 after entering the field as a Monday qualifier. He’s ranked 41st in the world this week after a hot start to the season.

He believes he’ll be a different player when he tees off on Thursday compared to the man who won the Texas Open in 2019.

Brooke Henderson of Smiths Falls, Ont., tees off on Thursday at the ANA Inspiration, the first major of the LPGA Tour season. It was last held in September 2020 because of the COVID-19 pandemic.

Henderson was tied for first with American Nelly Korda and South Korea’s Mirim Lee at 15-under after four rounds at last year’s ANA Inspiration. Lee won the tournament with a birdie on the first playoff hole.

The 23-year-old Henderson, who has the most professional tournament wins in Canadian golf history, said she has learned from that playoff defeat.

“I think it’s really important to take away the positives from that week because I played really well and there’s a lot of good things that happened,” said Henderson. “Unfortunately I didn’t lift the trophy but I was tied for the lead when we finished 72 holes. So that’s a lot of confidence and that’s a great feeling.”

David Hearn of Brantford, Ont., Roger Sloan of Merritt, B.C., Michael Gligic of Burlington, Ont., as well as Adam Hadwin and Nick Taylor of Abbotsford, B.C., are the other Canadians in the field at the Texas Open.

The winner, if not already qualified, gets a spot in the Masters, the first major of the men’s season, next week in Augusta, Ga.

Hamilton’s Alena Sharp is the only other Canadian in the field at the ANA Inspiration.

Canada is coming off a big week on the PGA and LPGA feeder circuits.