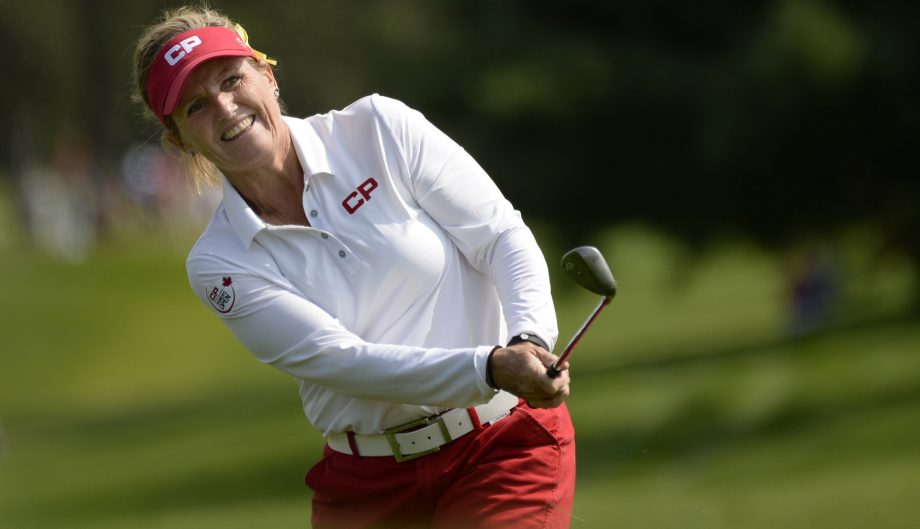 OTTAWA – Alena Sharp knelt down beside her bag and wrote the initials DC-J on each of her golf balls. She tucked the marker back into her bag and grabbed a pair of yellow ribbons with the same three letters monogrammed on them and scanned the crowd to hand them to her mom.

Sharp, who had an identical ribbon pinned to her hat, then lined up her shot from the No. 1 tee to start her first round at the CP Women’s Open on Thursday. She was one of several golfers honouring Canadian golf hall of famer Dawn Coe-Jones at the LPGA Tour event.

Coe-Jones left an indelible mark on women’s golf in Canada, winning three LPGA Tour events and the 1992 Match Play Championship, with 44 top-10 finishes over a 24-year career. She lost her battle with sarcoma, a form of bone cancer, on Nov. 12 at the age of 59.

“It’s just so sad that someone that young and that healthy can have that kind of bad luck,” said Sharp, a native of Hamilton, after completing a 7-over 78 in the first round of the tournament. “She’s not with us anymore, which is so sad.”

Sharp began marking her balls with Coe-Jones’s initials toward the end of last season and resumed the practice this week at the Ottawa Hunt and Golf Club to tie in with Golf Canada’s ribbon campaign honouring the pioneer of the sport.

“I’m really happy to see everybody wearing the ribbons this week and honouring her,” said Sharp. “It’s a great tribute.”

Coe-Jones competed in the Canadian Women’s Open 24 times and had seven top-10 finishes. She was the low Canadian (or tied) on 13 occasions and her $326,554 in earnings are the most by a Canadian playing in the Women’s Open. She retired from the LPGA at the 2008 national championship.

“It does mean a lot, not only to me, but I know her husband and son, are taking this in this week,” said Charlottetown’s Lorie Kane, who was a close friend of Coe-Jones. “It’s just nice for them to know their mom is loved.”

Maude-Aimee Leblanc of Sherbrooke, Que., Brittany Marchand of Orangeville, Ont., and Augusta James of Bath, Ont., were the low Canadians on Thursday at 2-over 73.

“(Coe-Jones) along with all the others were just really inspirational, especially being from Canada and not having that many people to look up to,” said Marchand, who also had a yellow ribbon affixed to her hat. “The few that have paved the way, it’s pretty awesome. It’s been great to be able to remember her this week and kind of keep her in everyone’s hearts.”

Calgary’s Jennifer Ha and superstar Brooke Henderson of nearby Smiths Falls, Ont., finished their rounds at 3-over par.

Honoring Dawn Coe-Jones this week at the CP Women's Open. Thank you for paving the way for… https://t.co/E1RBTABDe5

Henderson was followed from hole to hole by droves of fans, but despite the vocal support she struggled with her putting. Henderson went to the practice green after her morning round.

Amateur Jaclyn Lee of Calgary was 4 over, Quebec City’s Anne-Catherine Tanguay was 5 over, Samantha Richdale of Kelowna, B.C., was 6 over, Hannah Hellyer of Sterling, Ont., was 7 over and amateur Maddie Szeryk of London, Ont., was 8 over.

Kane tied with amateur Grace St. Germain of Ottawa at 9 over, while Victoria amateur Naomi Ko finished at 12 over.