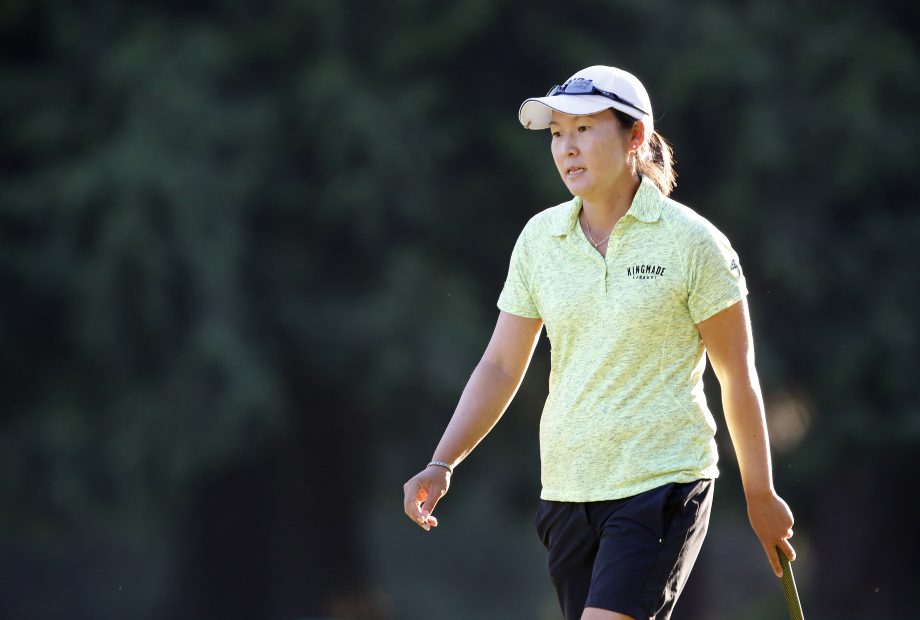 “I’ve been working pretty hard lately,” Kung admitted. “I guess it was a slump that I had back in 2010, 2011, I just got caught up in life a little bit. Now I feel like I can get back into it again, play some golf, have some fun.”

Kung started her day in style with birdies on Nos. 10 and 11, her first two holes of the day, and then added a tap-in eagle at the par-5 13th to take her score to 7-under for the tournament. Eight pars followed before Kung closed strong with birdies on four of her last six holes to post the low round of the tournament which also tied the course record.

“I just went out there, played one shot at a time, and I knew that I was putting pretty good,” Kung said. “I missed a few out there from about 10 feet. I was hitting them pretty close all day and then made some key putts coming in.”

The four-time LPGA Tour winner is coming off of her best finish of the year with a tie for second at the Cambia Portland Classic last week.

“I’ve been playing well,” Kung said of her recent strong play. “Just the putter has to go and so far, it’s been going pretty good the last six tournament days.”

Chasing Kung will be first round leader Karine Icher and 2012 and 2013 champion Lydia Ko, who each sit two shots back at 9-under par.

“I really don’t care who is behind me,” Kung said confidently. “I’m just going to go out there, play my one shot at a time. I’m hitting it good, I’m putting it good, and let’s see what happens.”

Seventy-six players made the cut at 1-over par 145. Notables to miss the cut included – Paula Creamer, Michelle Wie and Karrie Webb.

Alena Sharp heads into weekend action as the low Canadian after shooting even-par 72 to grab a share of 32nd. Sharp came to The Vancouver Club riding momentum from a top-10 finish last week in Portland. The Hamilton native, who made her first cut at Canada’s National Women’s Open Championship since 2009, fed off support from the Canadian crowd and looks forward to making a charge on the weekend.

“If you look around, there’s so many people here. The crowds are amazing and it’s always like that at the Canadian Open and everybody is always cheering for you. It’s that little extra pressure you put in your mind because you want to play well for the hometown crowd,” said Sharp. “I feel great. I haven’t made the cut at the Canadian Open I think since 2009, so it’s been a long time. I played well the last two days. Left some shots out there, but I have lots to look forward to on the weekend.”

Teenage sensation Brooke Henderson began the day with a share of 13th position at 2-under but stumbled Friday to a 3-over 75 to make the cut at plus-1 on the number. The Smith Falls, Ont., native acknowledged the extra expectation to perform in front of the home crowd and the need to channel that energy.

“It’s pretty cool that so many people are watching and wanting me to do so well. And I think it is a much different atmosphere than if I was playing across the border. Same conditions just different crowd,” said Henderson. “You know, it’s fun, though, and I have to really learn to enjoy it and just build off their energy, because it is pretty cool that they are cheering for me.”

Rounding out the Canadian contingent advancing to weekend play was Maude-Aimee LeBlanc. The Sherbrooke, Que., native shot a 1-under 71 Friday and sits tied with Henderson at 1-over for the championship.

Third-round action gets underway Saturday at 8:30 am PT with the final pairing teeing-off at 2:40pm PT. Tickets are still available at the gate and kids 17 and under are free.