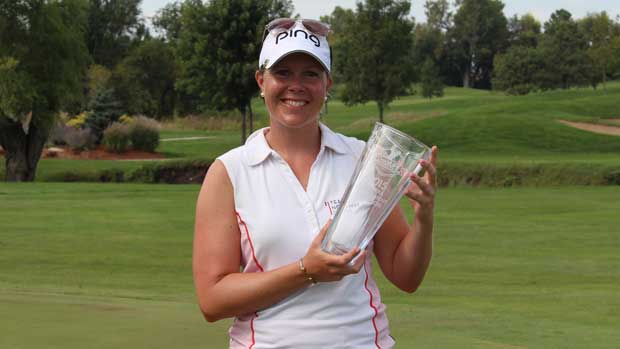 The 29-year-old former Florida State player won four weeks after applying for a job as an assistant college coach and coming close to quitting professional golf.

“This is everything I have ever dreamed of and more,” Westrup said. “Finally, finally, I can say that I won my first professional event.”

“This is a life changer for sure,” Westrup said. “I put myself in good position to earn my full LPGA Tour card for next year.”

Westrup missed the cuts in her previous three starts.

“I was almost to the point where I wanted to quit and start a new career,” Westrup said. “When I went home, I was able to practice, workout and spend time with friends and family. It’s funny, a lot of people told me that I was going to go out and win the next event and here I am today. It’s crazy thinking a couple weeks ago I was going to quit golf. Thank god I didn’t.”

She birdied the final hole, hitting her approach to 6 feet.

“I was shaking so much over that putt, I was really nervous,” Westrup said. “I just told myself not to hit it hard. … I just couldn’t have been more happy when it went in.”

“The LPGA is where I want to be and that is where every golfer wants to be,” Molinaro said. “It is an incredible stage with incredible tournaments with the best in the world. A huge part of who I am is what I learned on this tour.”

Nicole Zhang of Calgary led the Canadian contingent with a final-round 5-under 66 to reach 7-under for the tournament and a share of sixth place. Samantha Richdale and Augusta James finished T14 at 4-under 280 while Maude-Aimee Leblanc, Anne-Catherine Tanguay and Sara-Maude Juneau followed at T20.