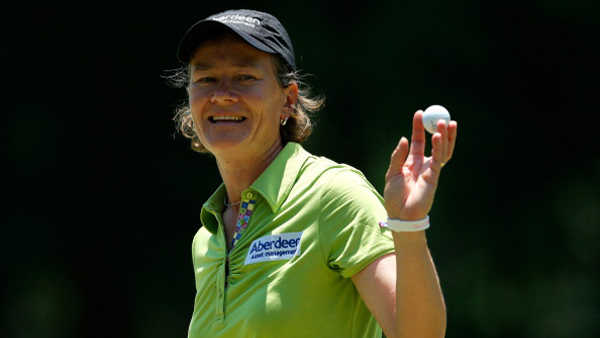 MOBILE, Ala. – Catriona Matthew took the first-round lead Thursday in the Airbus LPGA Classic, holing a bunker shot for an eagle and finishing with an 8-under 64.

The 44-year-old Scot rebounded from a bogey on the par-4 12th – her third hole in the morning round – with the eagle on the par-5 13th and birdied seven of her final 11 holes.

“That kind of kick-started my round,” Matthew said about the eagle.

She won the last of her four LPGA Tour titles in 2011.

“Obviously, really pleased,” Matthew said. “Just had two weeks at home, so never quite know what you’re going to come out and play like. So, yeah, delighted. Got the putter going and holed some putts.”

Charley Hull had a bogey-free 65 in the afternoon. The 18-year-old English player birdied the final two holes on the Crossings Course at the Robert Trent Jones Golf Trail’s Magnolia Grove complex.

“I putted quite well, hit it quite solid, and hit, I think, every green,” said Hull, playing on a sponsor exemption. “I still left a few shots out there. I missed a 3- or 4-footer, but hey, another day tomorrow and hopefully I can go low.”

“The scores are so low that if you don’t go pretty low the first day, you’re kind of behind the 8-ball,” Lewis said. So, it was really nice to get off to a good start.”

The Texan won the North Texas LPGA Shootout three weeks ago for her ninth tour title. Last week in Virginia, she closed with a 74 to tie for 12th in the Kingsmill Championship.

“Coming off of last week where I didn’t hit the ball well, I was happy with the way I drove it today,” Lewis said. “I hit it solid and made some putts. Figured something little out in my putting and I think that might help the rest of the week.”

Pettersen, playing her fourth event since returning from a back injury, had a bogey-free round.

“I’m feeling pretty good, felt pretty calm,” Pettersen said. “I feel like my game is right there, trying to be patiently aggressive. Playing smart on the hole locations that aren’t quite set up for being aggressive and then trying to take advantage. But the greens are fairly receptive, so it feels like you can kind of fire at the pin and not have to worry about too much spin, which makes this course a little bit easier.”

Ji, the 2009 U.S. Women’s Open champion, birdied four of the five holes in a bogey-free round.

“I felt good this morning when I was warming up,” Ji said. “Feel good with my swing and with my putter. Was out there like, `I can see the green. I can see the line.’ So I just made a lot of putts.”

Bahamas winner Jessica Korda was three strokes back at 67 along with 2010 champion Se Ri Pak, Nicole Castrale, Julieta Granada, Moira Dunn and Jenny Shin. Pak also won the Tournament of Champions on the course in 2001 and 2002.

Anna Nordqvist, a two-time winner this year, had a 68, and Kraft Nabisco winner Lexi Thompson opened with a 70. Michelle Wie, the winner in Hawaii, and defending champion Jennifer Johnson shot 71.

Top-ranked Inbee Park had a 74. She’s winless in eight tour starts this season after sweeping the first three majors last year and finishing the season with six victories.

Jennifer Kirby of Paris, Ont., shot a 3-under 69 in the first round to place herself among the top-20 scores of the day. She will head into the second round as part of the group tied for 18th.