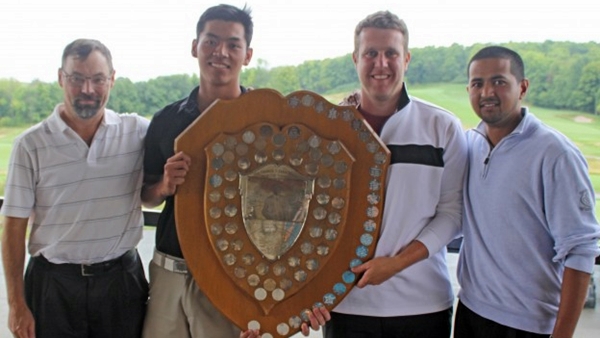 Four-man teams from golf clubs across Ontario came together for the 79th playing of the event. Players took to Bond Head’s South Course in a combined gross-score format, with Cedar Brae earning the title by three strokes at 16-over (304).

At the end of the round it was Gibson who led the way finishing in a tie for second among all players at even-par (72). Persaud and Kwok were both second on the team at four-over (76) and St-Germain finished eight-over (80). It is the third title for Cedar Brae since the inaugural event in 1931. Cedar Brae’s last title came in 2006.

“Winning this is a big deal for us,” said Gibson. “There are so many good players at our club so I think just to be here and represent the club in a competition like this is an achievement. There are a lot of folks that are going to be proud of us when we get back. We’ve had our name on here (the George S. Lyon Shield) before, but it has been a while, so it is good to have it back on here.”

Gibson went on to discuss how the team dealt with the day’s rainy conditions.

Runner-up honours went to the team representing the Sarnia Golf and Country Club – Ethan O’Meara, Eric Pattenaude, Stephen Brown and Aaron Pedlar, who were three shots back finishing at a combined 19-over (307).

The bronze medals were awarded to the team from The Club at North Halton. They finished the day at a combined 22-over (310). North Halton was comprised of Darren Morris, Brendan Heinz, Adam Salisbury and Rick Cody.

Pickering’s Christopher Kertsos, from York Downs Golf & Country Club, walked away with the top-individual award. He finished at two-under (70) and was the only player to finish the day under par.

For the final individual and team leaderboard, click here.

The George S. Lyon Team Championship was first played in 1931 and ran consecutively until 2000. Originally an inter-club championship, the event was reinstated in 2006 and is named after 1904 Olympic Golf gold medalist George S. Lyon, who still stands as the reigning Olympic champion of the sport.