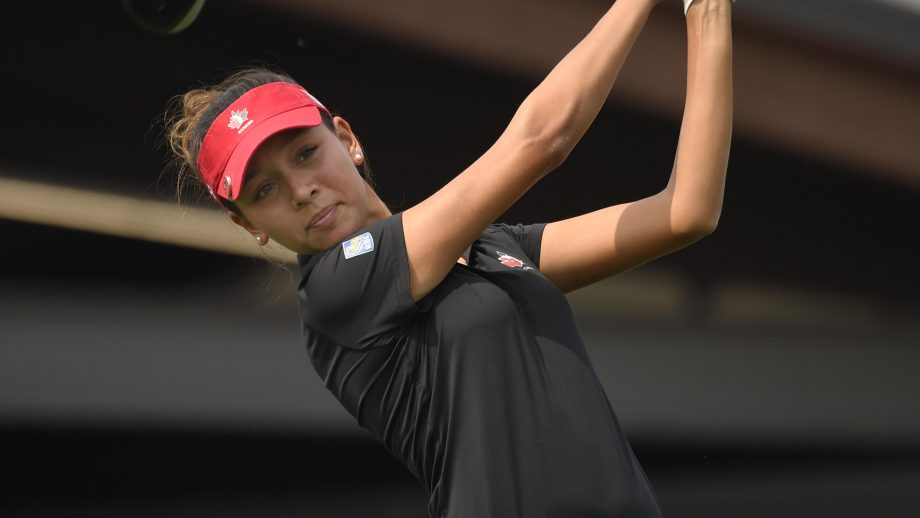 REGINA – Celeste Dao wanted her first appearance at the CP Women’s Open to be an experience she’ll always remember.

Her first hole at the Wascana Country Club on Thursday was one she’ll likely never forget.

Battling nerves in her tournament debut, the 17-year-old developmental squad player nearly sent her opening drive out of bounds. Faced with a terrible lie under low-hanging tree branches, she whiffed on her second shot and later found the rough and the bunker before settling for a double-bogey six.

But showing remarkable mettle for a youngster not used to playing on the LPGA Tour, Dao responded with a birdie on the second hole.

“I turned the page,” Dao said. “I was ready to make birdies after.”

Dao bogeyed the seventh hole and had three birdies on the back nine for a solid 1-under-par 71.

“Being patient – that’s my big thing to play well,” she said. “I knew on the back nine there were par fives and par fours waiting for me.”

Dao, from Notre-Dame-de-l’Ile-Perrot, Que., is considered one of Canada’s top young prospects. She won her first international title at the 2018 Mexican Junior Girls Championship and also qualified to play in the U.S. Women’s Open.

Dao uses a slow backswing and comes down on the ball with a seemingly effortless motion. Her crisp ball striking and impressive short game were on display Thursday and she’ll be a good bet to make the cut if she keeps it up in the second round.

“All the skills are there,” said Golf Canada junior squad women’s coach Matt Wilson. “She just needs to keep chipping away at it. The more experience and exposure that she can get against the best competition possible, the better it is for Celeste.”

Dao, one of 16 Canadians in the field, was seven shots behind clubhouse co-leaders Colombia’s Mariajo Uribe and Thailand’s Ariya Jutanugarn.

Maude-Aimee LeBlanc of Sherbrooke, Que., was the low Canadian in the early going at 2-under 70. Alena Sharp of Hamilton, Ont. joined Dao at 71 while amateur Ellie Szeryk of London, Ont., was at even-par 72.

Elizabeth Tong of Thornhill, Ont., had a 73 and Augusta James of Bath, Ont., was at 74. Megan Osland of Kelowna, B.C., shot a 75 and Saskatoon native Bobbi Brandon had an 83.

Brooke Henderson of Smiths Falls, Ont., was one of several Canadian players with afternoon tee times. Jocelyne Bourassa was the last Canadian to win this tournament, taking the 1973 title in Montreal.

Dao said she also whiffed a shot in the fescue at last week’s Girls British Open Amateur in Northern Ireland.

This time, the ball settled under a large pine tree. She was forced to use a five-wood because her irons weren’t long enough due to the overhanging branches.

After the miss, her third shot found the long grass and fourth shot landed in the sand. Dao managed a nice save and hit the short putt.

She drank some water and quickly focused on the second hole, forgetting all about her opening struggles. Wilson said Dao knows she’s fully capable of recovering and putting a rough hole aside.

“It’s not common among teenagers especially when they would likely mostly panic in that situation,” he said. “But again, she’s a very resilient kid and just hyper-competitive.”

Play continues through Sunday at the US$2.25-million event.