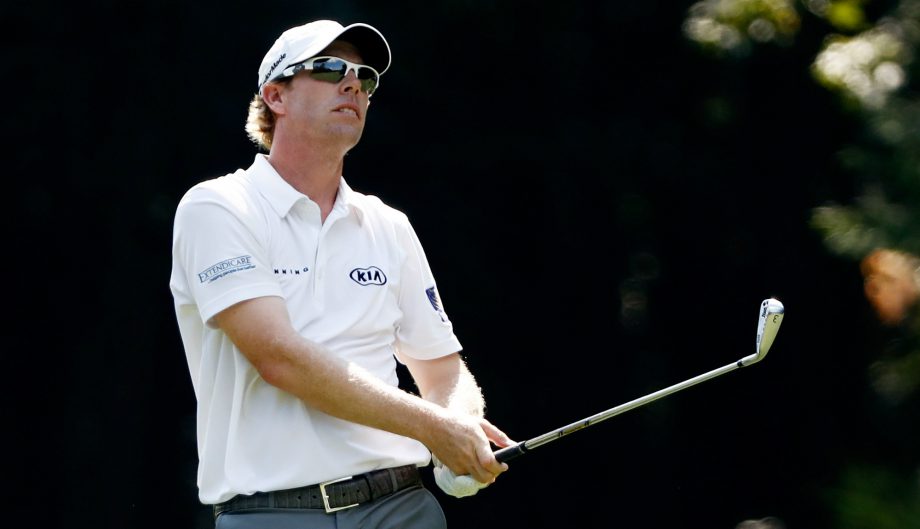 Chad Collins missed a chance for the 10th sub-60 round in PGA Tour history and third of the season, parring the final two holes for an 11-under 60 on Friday in the second round of the Barbasol Championship.

Collins hit his approach to the back fringe on the par-4 18th, leaving a 70-foot downhill birdie try that he hit 5 feet past.

“I just got myself out of position off the tee, which you can’t do,” Collins said. “Probably one of the easiest hole locations on the green, so it was kind of unfortunate to not hit the fairway and I probably would have had a better look at birdie there. I gave it a run. I’m not too disappointed at all by 60, so I’ll take it.”

“Hit a good shot, but I hit it a little heavy,” Collins said. “I didn’t think it was going to get back there and it must have had a lot of overspin, hit the downslope, chased back there. I wasn’t sure how close it came to going in, but had to come pretty close. And then the putt was a little tricky. We couldn’t quite figure out if it was kind of right centre, right edge or left centre, left edge. Just kind of lost a little bit of speed and broke off the left edge. ”

Jim Furyk shot a record 58 last year in the Travelers Championship in Connecticut and is one of eight players to shoot 59. Justin Thomas and Adam Hadwin shot 59s in January – Thomas in his victory in the Sony Open in Hawaii, and Hadwin in the CareerBuilder Challenge in California.

Brantford’s David Hearn is five strokes back of Collins at 10 under par (67-65).

Collins had five birdies in a front-nine 30, parred the 10th and ran off the six straight birdies to get to 11 under for the round.

“It kind of crossed my mind probably on the par-5 16th,” Collins said about breaking 60. “Didn’t hit a very good tee shot there, but it was probably going to be a three-shot hole anyway. Then hit a good approach shot in there to 10 feet or so. When I made that, obviously with two holes to go, just needed to make one.”

He made the 36-hole cut for only the fifth time in 23 events this year. The two-time Web.com Tour winner had missed five straight cuts and 11 of 12.

“This year’s been kind of a struggle for me,” Collins said. “I haven’t been playing that well and it’s super nice to see putts fall in, good ball-striking and being in position on the weekend.”

Collins had his lowest round on the PGA Tour and tied the course record set last year by Jhonattan Vegas. He had 23 putts Friday.

“Owe it all to the putter,” Collins said. “I did strike it well, but I made a lot of putts. Made a few that I probably shouldn’t have made, had a stretch going there on my back nine of five or six in a row. Hit some clutch shots, but just made a lot of putts.”

He also shot 60 in a 2013 Web.com Tour event in Utah, playing his first nine holes in 9-under 27 with an eagle and seven birdies.

Murray had five birdies in a seven-hole stretch on the back nine.

“I saw the 15 (Collins’ total) before I even teed off and I was 11 back and now I’m four back, so I’ll take it,” Murray said. “He’s a good player and there’s a lot of good players up at the top. Just got to keep making birdies on this course.”

Tringale played the back nine first, also making five birdies on the side.

“The course is set up for scoring today, a lot of front pins, a lot of opportunities to get the ball close,” Tringale said. “Just got to get it in the fairway, and my iron play has been strong most of this week, so that’s really my plan, just keep it in front of me.”

Furyk had a 68 to get to 5 under. The 47-year-old U.S. Ryder Cup captain is playing the event after failing to qualify for the British Open. He took the last three weeks off for a long-planned European river cruise with his family, and has been fighting a shoulder problem.