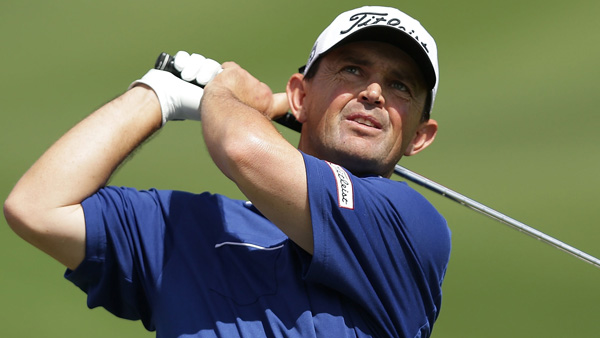 SYDNEY — Two-time former champion Greg Chalmers took a one-stroke lead Friday at the Australian Open after a 5-under 66, while marquee attractions Rory McIlroy and Adam Scott weren’t far behind on a tough day for scoring.

Chalmers had seven birdies in his second round to move to 5-under 137 after 36 holes.

Defending champion McIlroy played in difficult afternoon conditions at The Australian Golf Club and he persevered for an up-and-down 69 to be in a group tied for second.

Scott and American Jordan Spieth played together in calmer morning conditions and Spieth (72) was in a group tied for sixth, two behind. Scott, who moved from potential cut to contention with a 66, was three strokes behind.

After two rounds, there were only 16 players under par.

The group of four tied with McIlroy included American Conrad Shindler, who shot 68. Last year, Schindler donated all his $15,000 prize money from his first win as a pro on a U.S. developmental circuit to a relief fund for victims of tornadoes in Oklahoma.

Chalmers, who the Australian Open in 1998 and 2011, said the swirling winds Friday made club selection difficult.

“It seemed to move around a little bit and change direction,” Chalmers said. “Sometimes you think you should be downwind and because you’ve turned in a certain direction you’re actually into the wind. I think I changed clubs two or three times on shots.”

McIlroy only had only one par on the back nine – the 10th. The others, from the 11th, went birdie, bogey, bogey, eagle, birdie, bogey, birdie, birdie. He also birdied the ninth with about a 70-foot putt, but also plunked balls in the water on two holes for bogeys.

“I felt like I had an opportunity today to maybe shoot a good one and put a little bit of space between myself and the rest of the field, but it didn’t really pan out that way,” McIlroy said.

Spieth had to call for a rules official on the par-3 fourth hole when a marshal stood on his ball, but neglected to tell him when he got to the green.

Members of the gallery informed Spieth, and after he took a drop, the American fluffed his chip and missed his putt for par. On the way to the next hole, he angrily flung his ball into a creek.

His round ended well with birdies on his last two holes, but that wasn’t enough to make it feel like a good day for Spieth.

“It was a struggle, big-time struggle,” Spieth said. “I wasn’t hitting it well. If I wasn’t putting well I may have shot 45 on the back nine.”

Scott, starting on the 10th tee Friday, made quick amends for his opening-round 74 which left him in 82nd place and in danger of missing the cut. He eagled the par-5 14th and had two birdies to make the turn in 32, then birdied the par-4 sixth coming home.

“Yesterday I got off to a bad start, and I didn’t scramble well when I had to and it started to get away from me,” Scott said. “Today a couple of good shots coming up 14 and I made an eagle and momentum is on your side.”

Scott said the reason scoring has been difficult is the mostly contoured greens at The Australian.

“I think the greens were certainly testing us, getting to understand the slopes on the greens and especially around the edges,” Scott said. “So getting it very close to the hole is not that easy. I think the greens have to be the defense because there is no rough.”

Players on Friday wore black ribbons on their hats or shirts in memory of cricketer Phillip Hughes, who died Thursday two days after being hit in the head by a ball during a match at the nearby Sydney Cricket Ground.