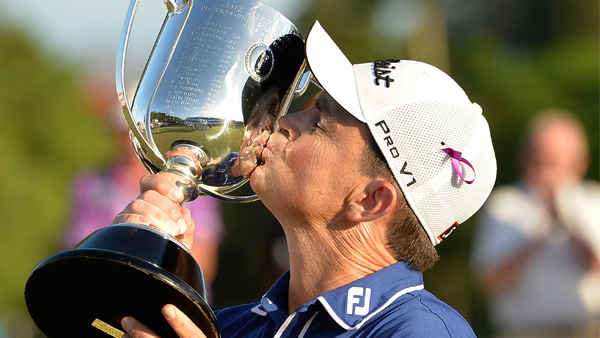 GOLD COAST, Australia — Greg Chalmers made par on the seventh hole of a playoff while Adam Scott three-putted for bogey to hand the Australian lefthander the Australian PGA championship.

Chalmers, who shot an 8-under 64 Sunday at Royal Pines after trailing the leaders by seven strokes going into the final round, and Scott and Wade Ormsby, who both shot 71, finished with 72-hole totals of 11-under 277.

Ormsby dropped out of the playoff when he made par on the third playoff hole, while Chalmers and Scott birdied.

Scott missed a 12-foot birdie putt on the first playoff hole that would have won it, and did the same on the second extra hole, when Ormsby missed from seven feet.

Chalmers finished his round about an hour before the other two players in the playoff. He won the Australian PGA Championship in 2011, also following a three-way playoff.

Scott had four opportunities to win the Joe Kirkwood Cup with birdie putts during the playoff but failed to make any. When he missed a four-foot putt for par on the seventh playoff hole, it allowed Chalmers to seal the win with a near tap-in.

“Just phenomenal, I’m worn out,” the 41-year-old Chalmers said. “I was all over the place … really excited and thrilled.”

The playoff was the longest for a top-tier tournament in Australia.

On the third playoff hole, Ormsby’s bid for a second pro win faded as he went wide on his approach.

“It was nice to get into the playoff there,” Ormsby said. “I didn’t think I was going to get in, but yeah, a little bit disappointed.”

Chalmers’ putting proved to be the difference after he made eight birdies during his fourth round to post a tournament-low round.

It ended a disappointing three tournaments in four weeks in Australia for Scott, who announced Friday that he and his wife were expecting their first child in February.

This year, Scott failed to defend his PGA and Masters titles. And he played two weeks ago in Sydney when American Jordan Spieth shot a final-round 63 to win by eight strokes at the Australian Open. Scott was nine strokes behind at The Australian and was tied for fifth.

“I didn’t hit it close enough today to the hole,” Scott said. “It wasn’t like I missed 10 footers today all day long. When you hit it outside 25 feet, there is almost the same chance you are going to three-putt as two-putt on tour. You have to hit it closer.”