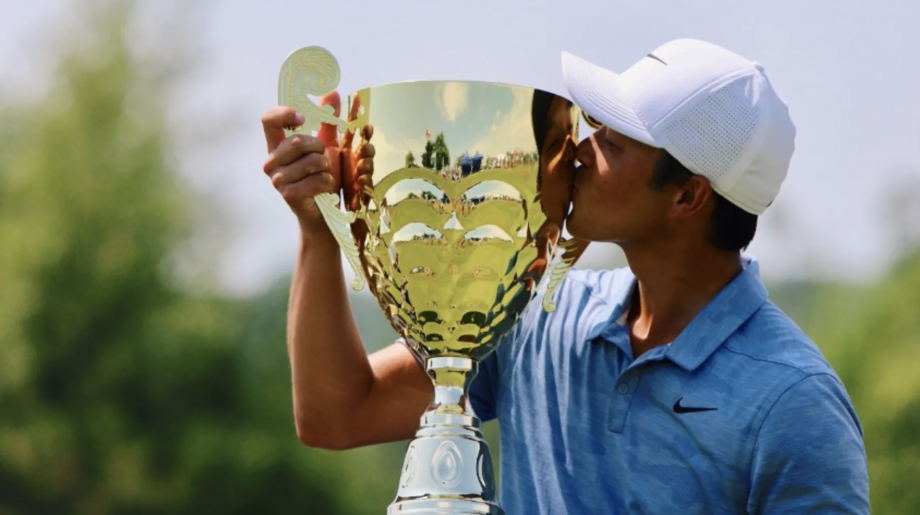 HALIFAX, N.S. — Throughout the first half of the Mackenzie Tour season, it has felt like a matter of time before Lorens Chan would pick up his maiden victory.

And when Chan two-putted for par from 30 feet on the 72nd hole to pick up a two-stroke victory at the inaugural event, Knapp was the first one to give his buddy, and past UCLA teammate, a hug.

“We were texting last night, and he said, ‘Let’s make it fun tomorrow,’” said Chan following his victory. “I said, ‘If I don’t win, I want you to win,’ and he said the same thing back to me.

“I just told him ‘”Let’s just finish one-two, no matter who wins.”

“Throughout the whole season I’ve been knocking on the door, but I’ve come up a little bit short and made a few mistakes on the weekends, that adds up and I finish a few strokes behind,” said Chan, who moved to third on the Order of Merit with the victory.

“Since Friday, I’ve been getting lots of texts encouraging me from friends and family. They said ‘This is your week,’ so I kept telling myself that it was my time.”

Chan wasted no time adding to his one-stroke lead entering Sunday. On hole No. 1, the Honolulu, Hawaii, native drained a 40-foot eagle look to quickly separate himself from playing partners Hayden Shieh and Stoney Crouch.

“I was kind of struggling on that hole this week, and I was just trying to two-putt from 40 feet,” said Chan. “For that to go in was a bonus and set the tone for the round because there’s nothing better than making a long putt to start the day.”

The 25-year old managed to avoid looking at leaderboards throughout the entire round. It wasn’t until he asked his mom, Linda, who has also doubled as his caddie this season, what his status was on the final hole.

“She said I had a two-stroke lead, but I wanted to make sure it was fully updated,” said Chan. “When I was on No. 17, I knew there was a leaderboard, but I didn’t need any more pressure, I’m trying to make the putt regardless of if I’m up by 10 or down by 10.”

Throughout the season, Chan’s mom has closely shadowed him, a woman whose smile beamed from ear to ear as her son accepted the trophy.

“She means everything. She’s been my biggest cheerleader since day one,” said Chan. “Ever since my dad passed away a few years ago, she has been even more of a cheerleader for me. It’s really nice having her on the bag.”

For the second consecutive week, Canadian Taylor Pendrith was in the mix on Sunday. Coming off a runner-up finish a week ago at the Osprey Valley Open, Pendrith shot a final-round 69 to tie for third with Blake Sattler and Hayden Shieh.

With a scoring average of 66.75 the past two events, Pendrith successfully picked up his second consecutive Canada Life Canadian Player of the Week Award, his third of the season.