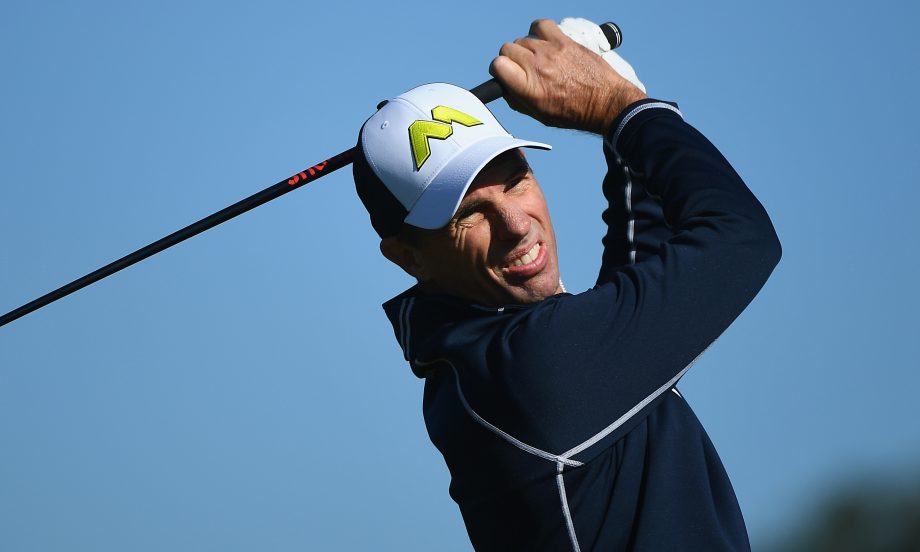 OAKVILLE – When professional golfer Steve Alker climbed the steps to enter the Glen Abbey clubhouse upon arriving at the 2000 RBC Canadian Open, he didn’t know it, but he was a marked man.

“They knew I was from New Zealand,” Alker said with a cheeky smile, referring to Gordon and Nancy Dooley, the married couple who were volunteers welcoming competitors and their families at the main entrance to the clubhouse that has played host to the RBC Canadian Open 27 times in its 112-year history.

At the time, the 29-year-old Alker was traveling with Tanya, whom he had met nine months earlier and had given up her job as a cruise ship director to travel with him and caddie for him. The Alker’s, now married and have two children, currently reside in Scottsdale, Arizona.

“Steve and Tanya asked us to keep an eye on his golf clubs while he went to register for the tournament,” Gordon Dooley said while recalling their first meeting. “We got to talking and while following him around the course during the week, Nancy mentioned our intention to travel to New Zealand.”

Alker could have said ‘great, thanks for your time and see you later’, but that’s not really his personality. As Gordon and Nancy continued to seek advice about New Zealand, it opened his eyes as to what his country really had to offer.

“I think the fact that they had the courage to approach me in the first place – many volunteers would be too shy or overawed to do that,” he said. “You’ve got to respect that. They were generally interested in my country and I was enthusiastic to tell them about it.”

Alker was at Canada’s premiere PGA TOUR event having qualified after winning the Mackenzie Tour-PGA TOUR Canada Order of Merit. Like most Kiwi’s, he’s proud of his country and took the opportunity, when asked, to share all the wonders of the spectacular island nation where he grew up. The Dooley’s, from nearby Clarkson, and in their 60s at the time, listened intently to Alker before inviting him and Tanya to dinner.

Later that week, after accepting the Dooley’s invitation to dine with them, the young couple got to know the older couple and a friendship was formed. Alker felt comfortable enough to make the Dooley’s an offer they couldn’t refuse.

“Steve offered his home and car for the period we were planning to be in New Zealand as he was going to compete on the Asian Tour at that time,” Gordon said. “We accepted his kind offer, and since he was aware that we played golf, he organized guest playing privileges for us at his home club.”

“I just told them they were welcome to stay at my house in Hamilton,” Alker added. “It was helping them out and I wasn’t going to be there anyway so it made sense for them to use it as a base.”

Hamilton, in the central North Island of New Zealand, was where Alker learned the game. He spent hours honing his well-envied short game on the practice facilities at the St. Andrews Golf Club alongside the Waikato River under the watchful eye of his dad, Bill, who was an accomplished amateur golfer himself. Alker felt the city’s central location made it a good jumping-off point for the Dooley’s.

“It’s easy to get to the incredible geothermal activity in Rotorua, the lakes and mountains near Taupo, or the popular beaches at Mt. Maunganui,” he said. “It’s all within a couple of hours drive.”

The Dooley’s five-week trip to New Zealand in 2001 was all they’d dreamed of and their relationship with the Alker’s snow-balled from that point. Steve and Tanya stayed at the Dooley’s home the following year when he competed in the RBC Canadian Open. The Canadian couple returned to New Zealand for a second vacation the next year, this time renting a beachside condo at Mt. Maunganui as they wanted to enjoy the atmosphere of the popular holiday destination. The avid golfers even became temporary members at the Omanu Golf Club during their second visit.

The two couples stayed in contact and became family friends, exchanging Christmas cards each year. Sometimes they don’t talk for five or six months but they easily pick up from where they left off, like good friends do.

After missing the cut in his first RBC Canadian Open, the same year he first met the Dooley’s on the steps at Glen Abbey, Alker made three more starts in the tournament, tying for 55th in 2001, posting a tie for 42nd in 2003 and making the cut in 2015 but failing to advance to the final round after a 54-hole cut.

“They were still volunteering each time I played,” Alker said.

While reflecting on his relationship with the Dooley’s, Alker was asked why he thinks his bond with the Canadian couple is so strong.

“They are nice people, they are genuine,” he said. “Perhaps it’s the Commonwealth bond of Canada and New Zealand. Right from the start they were very interested in us. My wife is the chatty one. She got to know them really well.”

Alker admits that others may find the relationship that he and Tanya have with tournament volunteers like the Dooley’s is a little unusual.

“It’s kind of unique I guess, but I’m not sure if it’s just volunteers,” he added. “It’s no different than getting paired with people in pro-am events and exchanging cards and staying in contact. I think, deep down, the game of golf and what it offers, the bond with people, that’s the key here.”

Gordon thinks this year will be the 14th he and Nancy have volunteered for the Toronto tournament. His favorite moment during that time was watching Tiger Woods hit the epic 6-iron from the fairway bunker on the final hole to win in 2000 by a single stroke over New Zealander Grant Waite.

“What we like most about volunteering is the proximity to the professionals,” he said. “Sometimes they will engage in chatter with us if they are so disposed.”

Alker will see the Dooley’s again at this year’s RBC Canadian Open. Tournament staff confirmed the couple registered as volunteers well in advance. Alker will be in the field, with the 2016-17 season his third full stint on the PGA TOUR. He was also exempt on TOUR in 2003 and 2015 and has bounced around the PGA Tour of Australasia, the Web.com Tour and the European Tour since turning professional in 1995. Along with 10 professional wins (four on the Web.com Tour, four on the Australasian Tour and two on the Canadian Tour), Alker has posted six top-25 results in 63 PGA TOUR starts before the 2016-17 season began. His claim to fame, and a guaranteed statistic to win you a bet, is defeating South Africa’s Dawie van der Walt on the 11th playoff hole to win the 2014 Cleveland Open, a Web.com Tour record for longest playoff.

Regarded by his peers as one of the nicest guys on TOUR, Alker has made many friends through golf. He’s appreciative of the times he’s played in the RBC Canadian Open and says meeting the Dooley’s has influenced the way he reacts to volunteers at other tournaments.

“Not that I had disrespect for volunteers before, but it’s amazing what they do and how they give up their time to do it,” he said. “I definitely feel a responsibility to volunteers, especially on Sunday when you are playing your final nine holes. I make a point of saying ‘thanks guys, for your help this week’. I think just doing that goes a long way.”