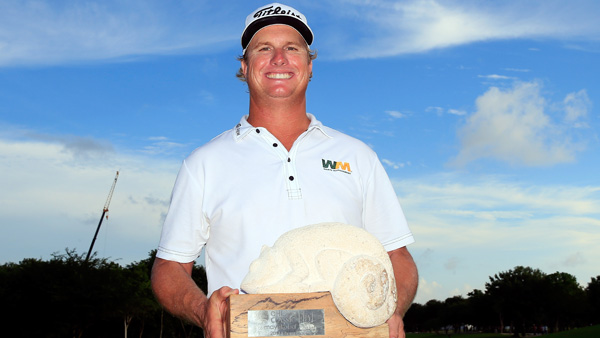 PLAYA DEL CARMEN, Mexico  — Charley Hoffman rallied from a three-shot deficit Sunday by closing with a 5-under 66 for a one-shot victory over Shawn Stefani in the OHL Classic at Mayakoba.

Hoffman ended another long drought with his third career victory on the PGA Tour. He had gone 105 starts between his first and second victory, and this time went 108 starts until winning the final PGA Tour event of the calendar year.

He referred to it as a low-stress round, with a few exceptions, including the final hole on the El Camaleon course at this Mexican resort.

Stefani, who closed with a 69, made an 18-foot birdie putt on the 17th to get within one shot. Stefani then hit into a fairway bunker with a lip so steep that he had no option but to hit sand wedge some 50 yards short of the green. Hoffman hit driver that rolled up against the base of a tree, which forced him to play a left-handed shot back to the fairway.

Hoffman pulled his approach some 30 feet left of the hole. Stefani’s pitch came up woefully short, and he chipped to 5 feet. That allowed Hoffman two putts for the win, and he rolled his par putt to within 18 inches for a tap-in bogey.

Danny Lee ran off seven straight birdies on the front nine to take the lead, but the former U.S. Amateur champion couldn’t hold on. Lee didn’t make another birdie the rest of the way, dropping three shots on the back nine for a 67. He finished two shots behind in a tie for third with Andres Gonzalez, who had a 67 for his best career finish.

Jason Bohn, the 54-hole leader, shot 40 on the front to fall out of contention. He closed with a 74 and tied for seventh.

Carlos Ortiz (68) and Oscar Fraustro (69) both played well in their native country and tied for ninth. Ortiz was the Web.com Tour player of the year in 2014 with three victories. Fraustro will get into the Sony Open at the start of next year by finishing in the top 10.

Canada’s David Hearn made back-to-back birdies on 17 and 18 en route to a 3-under 68 and finished in a tie for 16th place.  His countrymen Roger Sloan and Nick Taylor dropped back into a tie for 56th spot after carding rounds of 72.

Hoffman goes to Hawaii one week early by qualifying for the Hyundai Tournament of Champions at Kapalua. Hoffman also gets to return to the Masters for the first time since 2011.

Hoffman needed some help from Lee, who began missing all the putts he had been making on the front nine. And he needed a little luck. He was one shot behind Stefani on the par-5 13th hole when Hoffman feared his tee shot went into a hazard. It barely stayed in play, and he went on to make birdie. Stefani, who drove into the fairway, hit his second shot into a hazard and made bogey.

“That was a big change in momentum,” Hoffman said.

The two-shot swing sent Hoffman on his way. He missed a pair of short birdie putts on the 14th and 15th holes, and then hit an approach to 2 feet on the 16th to build a two-shot lead with two holes to play.

Hoffman’s wife and two young daughters greeted him on the 18th when he tapped in his final shot. The last time Hoffman won, his wife was pregnant with their first child.

“My daughter has been wanting to go Hawaii, so I guess we’ll make a New Year’s run,” Hoffman said.

The question is which caddie goes with him. He fired his longtime caddie a few weeks ago. A replacement came down with neck spasms and couldn’t go to Mexico, so Hoffman used Brett Waldman, who had been working for David Toms.

Canada’s David Hearn was the leading Canadian, tying for 16th at 10-under 274.