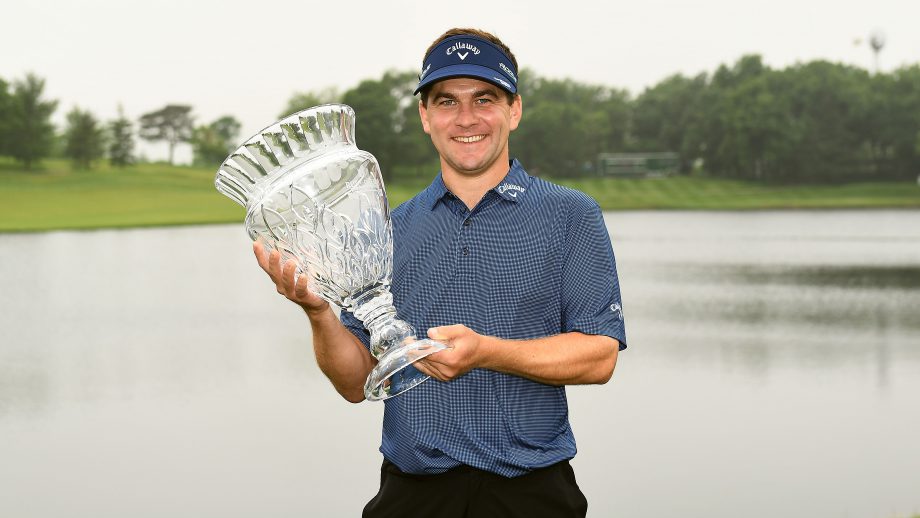 MUNDELEIN, Ill. – Before heading to Ivanhoe Club, Chase Wright lost in a playoff to qualify for the U.S. Open at Shinnecock Hills. The disappointment didn’t linger, as the 28-year-old Wright found himself in another playoff Sunday afternoon, this time at the Rust-Oleum Championship. Wright, who was tied with Alex Prugh at 17-under 271 at the end of regulation, birdied the second playoff hole to earn his maiden Web.com Tour victory in his 83rd start.

“This is so much sweeter,” said Wright, who moved to No. 5 on the money list. “This week was way more important than going out there for one week. I want to be out there for 30 weeks.”

Prugh finished 17-under first after three birdies on the final five holes. The 33-year-old from Spokane, Washington missed a 15-foot putt for birdie on the 72nd hole to post 18-under. Wright, who was in the group right behind Prugh, made par on the final three holes to end regulation at 17-under as well.

“I just wanted to not beat myself,” said Wright, who two-putted the par-3 17th from 80 feet away to remain in a tie with Prugh. “As long as I hung in there and did my thing, I would be fine.”

Wright did just that on second extra hole, hitting a 7-iron from 170 yards to 5 feet from the cup. After Prugh missed his birdie bid, the Muncie, Indiana native all but secured his PGA TOUR card by knocking in his birdie try.

“I kind of calmly knew it was going to happen all day,” said Wright, who started the day two strokes off the lead. “Even in some hard moments when I hit some bad shots, I got it up-and-down and went about my business.”

Wright admitted he felt the pressure coming down the stretch. Each time he sensed the magnitude of the situation, the six-year pro remembered his friend, the late Dennis ‘Zink’ Zinkon, who played on the Web.com Tour in the early 1990s and assisted the Tour’s operations team in all facets. Zinkon passed away in 2016 with a pulmonary embolism, at the age of 55, but still lives on in the memory of everyone involved with the Web.com Tour, including Wright who regularly sought out ‘Zink’ for advice when he was struggling.

“I was actually thinking about him coming in,” said Wright, about his late friend. “He was definitely there with me today. He used to tell me, putting is pretty easy. Aim it, roll it, and repeat one and two if necessary.”

Wright’s journey to the Web.com Tour’s winner’s circle can be traced back to last summer when he competed on Mackenzie Tour – PGA TOUR Canada. After spending three years on Tour, Wright lost his card and went to Canada to try and earn it back. In 12 events, he posted six top-25s and won the ATB Financial Classic in Calgary. Wright ended the season No. 8 on the Order of Merit and regained his status on the Web.com Tour with a T42 at Final Stage of the Qualifying Tournament.

“Just getting back was one of my goals,” said Wright, about his return to the Web.com Tour in 2018. “It’s just great being around everyone again. I know the courses, and this means a lot. I’ve been in this spot a few times and faltered. To come through is awesome.”

After four years of competing on the Web.com Tour, Wright is now likely headed to the PGA TOUR later this year. Like those that have graduated before him, he believes his time on Tour has prepared him for success at the next level.

“Just to make the cut out here, you’ve played pretty well,” said Wright, who became the 11th first-time winner on Tour this season. “I think it’s the second-best (level of) competition in the world, and most people out here will tell you that.”