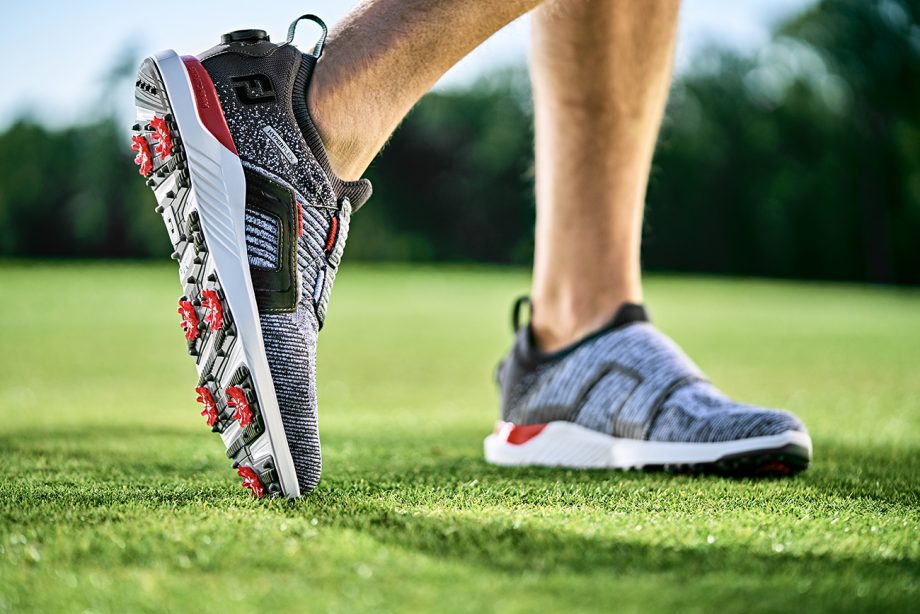 Team Canada along with activating on site at Golf Canada’s National and Amateur Championships. For this year, here’s a breakdown of some of the key products that FootJoy has to offer. With more Canadians playing more golf than ever in 2020, FootJoy is providing gear to help make every day playable. Be sure to contact your local PGA of Canada professional for fitting and availability, or head to FootJoy’s website to learn more.

The first thing golfers will notice about the FootJoy Premiere Series is that it’s an old-school cool vibe about it. But once you look under the hood and understand all the modern technology that goes into the newest shoe line from FootJoy, you can’t help but be wowed.

“It was a really fun project to work on,” says Keith Duffy, a senior product manager at FootJoy. “I’m confident we have the best design and development team in footwear but everyone upped their game a bit. When we started to look back at old catalogues and the footwear we used to release… it’s such a competitive advantage for us, that we have that history. We first started making golf shoes in 1910, and there’s just so much to lean back on.”

Designed and developed in collaboration with many PGA Tour players, the Premiere Series boasts three new upper designs. The Tarlow Collection has a cap toe design, The Packard Collection has a calfskin croc print accent in the saddle area, and The Flint Collection features embossed detailing on the saddle area but is clean otherwise. The shoes are 12 percent lighter than the ones they are replacing in the FootJoy line and boast the new Versatrax+ outsole to help deliver maximum traction. They are available, for both men and women, on March 1st.

“In talking to consumers, and that includes PGA Tour players, members at clubs, or daily-fee players, when they think back on the FootJoy brand, especially those who have been playing golf for a while, everyone always brings up the Classics!” says Duffy.

From modern traditional to modern-modern, the other new golf shoe option for 2021 from FootJoy is the Hyperflex. Featuring a new BOA fit system called WRAPID, it ensures a dialed-in, precision fit with a reduction in pressure on the top of the foot. It boasts a new foam blend in the cushioning and multiple flex grooves in the outsole to move naturally with your foot. It’s not just a good walking shoe, but it helps to maximize the ground force interaction through every swing.

The only piece of equipment golfers use for every shot, other than the ball, is their footwear. That’s why you see such strong effort put forth by FootJoy every year.

“So many players think of footwear as an extension of their equipment, or as equipment period, and so do we,” says Duffy. “We take it very seriously.”

Golfers in Canada took the course in record numbers in 2020 partially because many didn’t know if they might have had the game taken away from them, due to COVID-19 restrictions. Golf was played in all kinds of weather a year ago, and FootJoy has produced a solid line of apparel built for all conditions in 2021. There are four key performance outerwear jackets for 2021, all under the Hydroseries line.

“Everything we’re designing and developing at FootJoy is done so with the golfer in mind,” says Chad Crocker, the product manager of FootJoy apparel. “A lot of apparel companies can adapt from their other main focus, whether that’s running or outdoors or basketball or football. They make great products, but they adapt them to golf. Whereas FootJoy, we start with golf and that’s it. It’s focused on that.”

The HydroTour is designed to withstand the most extreme weather conditions and boasts a new technology called DrySeal – a double collar system that keeps rain out.

“We challenged our designer. ‘That’s just the way it is’ was not acceptable to us,” says Crocker of the ongoing issue with water dripping down the back of a golfer’s neck. “We had to figure out a way to stop that from happening.”

The two-layered collar features a cinch cord on the inside that seals off the elements. It’s also a soft multi-directional stretch fabric (so it’s not too loud or noisy) that has fewer seams. The other pieces FootJoy is releasing include the DryJoys Select LS (the lightest, most waterproof garment FootJoy as ever produced), the HydroKnit (feels like a mid-layer, protects like a rain jacket), and the HydroLite (a 100 percent waterproof piece that also comes in a short-sleeve version).

“The resistance to wearing rain jackets for a long time while playing golf came from the resistance the jacket presented throughout the swing,” says Crocker. “But as we design these garments, it’s imperative there is a full range of motion without any sacrifices.”

For 2021, FootJoy has developed one new glove called the Hyperflx. That new addition compliments two others, making FootJoy the most-worn glove in the game. The Hyperflx boasts superior feel, ultimate breathability, and soft comfort. It was built, according to Zabkar, with athlete construction in mind.

“We wanted to use best-in-class materials to help a golfer with their game. We’re utilizing premium cabretta leather for ultimate breathability, Tour-proven, soft and supple leather, and unmatched softness,” says Zabkar. “It’s the perfect glove for everybody.”

Zabkar says FootJoy quantifies success by showing how many PGA Tour golfers are deciding to wear the product. They’re the ones, he says, week after week trying to make money and are trusting FootJoy gloves to help them notch great results.

The other gloves in FootJoy’s line include the StaSof (which has been the No.1 leather glove in golf since 1983. The current version was released in 2018 and FootJoy leaned on decades of product innovation and testing), and the Pure Touch (“A gift to yourself,” Zabkar says. As it’s the ultimate in soft feel). No matter the product, however, the most important thing to do with gloves – like with shoes or clubs – is to get fit. Zabkar says over 60 percent of all golfers are wearing a glove that is too big for their hand. If you’re wearing a glove that is too big, he says, it’s going to cause early wear and tear.

“Gloves, says Zabkar, “are a key and essential piece of equipment for all golfers.”