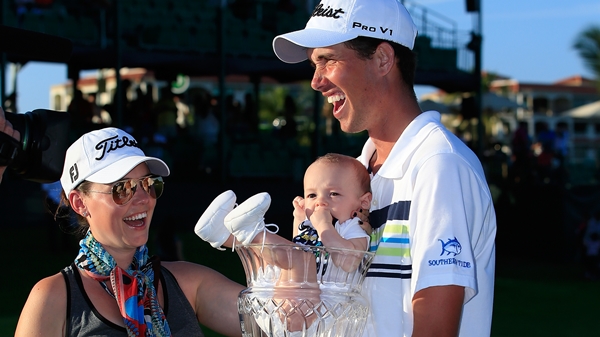 RIO GRANDE, Puerto Rico – Chesson Hadley dreamed about a day like this as a child – other than the tossing and turning in bed and queasy stomach.

He held off Danny Lee by two strokes in wind gusting to 25 mph at Trump International.

“I wasn’t vomiting or anything, but there were a couple of times where I felt nauseous out on the course,” Hadley said. “I went to bed. I watched maybe three minutes of the Duke-Carolina game. I fell right asleep and I woke up ready to go about 5:30, 6, and I never really went back to sleep, just kind of tossed and turned. ”

Making his 13th PGA Tour start, the 26-year-old Hadley birdied the final two holes for a 5-under 67. He’s the first rookie winner since Jordan Spieth in July in the John Deere Classic.

“It’s incredible. It’s a dream come true,” Hadley said. “This is what you dream of as a 6-year-old out in the bunker, hitting bunker shots on the range.

“It hasn’t sunk in yet. It’ll be nice to sleep on it and wake up in the morning knowing I’m a PGA Tour champion and nobody can ever take that away from me.”

Hadley finished at 21-under 267 and earned $630,000, a two-year tour exemption and spots in The Players Championship, PGA Championship and Tournament of Champions. He will move into the mid-60s in the world ranking, giving him a chance to get into the Masters if he can crack the top 50 at the end of the Texas Open.

“It opens up a lot of doors,” Hadley said. “It guarantees me a major. I’ve never played in a major before.”

He birdied three of the first five holes, chipping in on the par-5 fifth.

“It’s all about the start and I got off to a great start,” Hadley said. “Probably the shot that won me the tournament was the chip in on 5. I mean I was dead over there and I hit the nastiest little nipper over there, and it snuck in the left door.”

Lee birdied three of the last four holes for a 68. The South Korean-born New Zealander won the 2008 U.S. Amateur and also has European and Web.com victories.

“I really felt like I did my best. I gave it my best, but Chesson was just playing rock solid,” Lee said. “He made a couple of good up-and-downs from bad tee shots. When he plays like that, it’s just really hard to catch. He just didn’t make any silly mistakes at all.”

Hadley won twice last year on the Web.com Tour, taking the Rex Hospital Open in his hometown of Raleigh, N.C., and the season-ending Web.com Tour Championship. In Raleigh, the former Georgia Tech player began the final round five strokes behind Lee and closed with a 64 for a two-stroke victory.

“The two wins last year, that helps a lot because you’re there, you’ve learned how to win, you learn how not to choke, and there’s a lot going on,” Hadley said.

“I’m very happy with the way I played today,” Martin said. “Just kind of get back out there, get the juices flowing a little bit. Really, the first time that I’ve had that this year.”

David Toms was another stroke back along with Carl Pettersson, Jason Gore, Wes Roach and Richard H. Lee. Roach and Lee shot 67, Toms and Pettersson 69, and Gore 70.