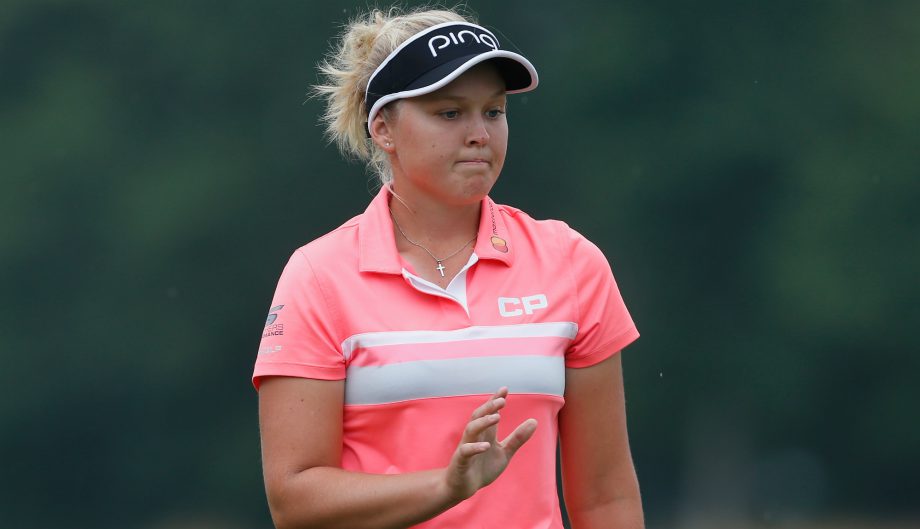 Shanshan Feng opened a two-shot lead Friday after two rounds of a U.S. Women’s Open that got its first visit from a sitting president.

Fresh from a Bastille Day celebration in Paris, President Donald Trump pulled into his Trump National Golf Club around 3:40 p.m., visited his president’s box next to the 14th green less than two hours later and played to the crowd, waving at the fans, giving them the thumbs up and pumping his fist.

That’s what a president can do for crowds not used to being within a 100 yards of one. Many critics of the president had hoped he would stay away from the $5 million tournament because of his comments about women and the fear that he would steal the spotlight.

Only three sitting presidents have attended USGA events with Warren G. Harding (1921) and Bill Clinton (1997) going to the U.S. Open.

Feng was the star on the course for the second straight day. The 27-year-old Chinese player shot a 2-under 70 and had a 36-hole total of 8-under 136 on the 6,732-yard course that played even longer because of rain over the past two days.

“My putting is really working. I’ve had two good rounds and I just hope to keep doing the same thing” – Shanshan Feng at #uswomensopen pic.twitter.com/Gc27b86Boi

Amy Yang of South Korea continued her good play in the Women’s Open and remained in second place, although her deficit grew to two shots after a 71. Yang has four top-five finishes in this event in the past five years.

Jeongeung Lee, who has had a win and 10 top-10 finishes on the KLPGA Tour, shared second after posting a second straight 69.

Lee uses the “6” after her first name because there are six other South Korean players with the same name.

Hye-Jin Choice, a 17-year-old from South Korea who is the world’s second-ranked amateur, also was at 6-under after a second straight 69. She was tied with Feng at 8 under after 15 holes, but bogeyed two of her next three holes to fall back.

Seon Woo Bae, a winner in South Korea last year, was alone in fifth place at 5 under after a 69.

"I'm a few shots back. Hopefully I can make that up the next 2 days & put myself in contention on Sunday” — Brooke Henderson #uswomensopen pic.twitter.com/7VCYHZGntg

Hamilton’s Alena Sharp and Maddie Szeryk of London, Ont., did not make the cut.

Earlier in the day, 2014 winner Michelle Wie withdrew because of a neck injury. She shot a 73 on Thursday and stopped on her second hole the next day.

Among those missing the cut at 2 over were Brittany Lincicome, who said two weeks ago that Trump should not attend the tournament so the focus would be on the golfers, and Danielle Kang, who two weeks ago won the KPMG Women’s PGA. Second-ranked Ariya Jutanugarn and two-time Open champion Inbee Park also missed the cut.