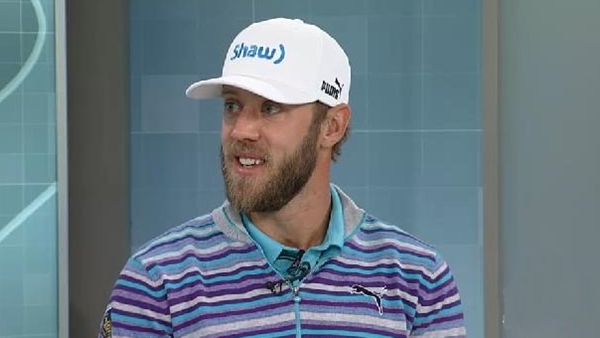 Shaw Communications has announced a multi-year partnership with Canada’s top-ranked PGA TOUR pro and Presidents Cup breakout star Graham DeLaet. As part of the agreement, DeLaet will sport the Shaw logo on the front of his hat and golf bag in golf tournaments around the world. DeLaet hits the field for the first time with Shaw branded gear at the 2014 Farmers Insurance Open, January 23-26 at Torrey Pines Golf Course in San Diego, CA.

“Graham is a highly accomplished athlete, a proud Canadian and a great ambassador for the game of golf,” said Brad Shaw, CEO, Shaw Communications Inc. “We are proud to have Graham represent Shaw and all of our employees and welcome him as part of our growing support for this great game in Canada.”

“I’m very excited to be part of the Shaw team. Shaw is one of the great, homegrown Canadian companies with a storied history of charitable and community support, which is something that I strongly believe in,” said Graham DeLaet.

This partnership will see Shaw and Graham explore all opportunities to create exciting new golf content, for viewers and advertisers by leveraging Shaw’s considerable media assets. Through this agreement Shaw will also become the official communications provider for DeLaet.

Known as one of golf’s best ball strikers, DeLaet had a breakout year in 2013, recording seven Top 10 finishes and finishing 21st on the PGA TOUR’s money list. He also placed eighth in the FedEx Cup Playoffs and finished the season with a solid performance in his first appearance with the International Team at the Presidents Cup. Starting off the 2014 PGA TOUR season, Graham has already recorded two top 10 finishes in three official events, and is currently ranked 23rd on the TOUR’s money list.

In addition to being the broadcast destination for golf through Global TV, Shaw is also a premier sponsor of the RBC Canadian Open and the title sponsor of the Shaw Charity Classic, the Champions Tour event held at Canyon Meadows Golf and Country Club in Calgary.

This week’s PGA TOUR stop, the Humana Challenge in partnership with the Clinton Foundation, focuses on fitness and healthy lifestyles but the event actually mirrors the human body in many ways. Check out this video produced by PGA TOUR Entertainment to see what I mean.

Hughes named finalist for Golden Horseshoe Athlete of the Year

Dundas, Ont. native Mackenzie Hughes has been named a a finalist for the Golden Horseshoe athlete of the year award.

Hughes, who will compete on the WebDotCom Tour this year, finished atop the PGA TOUR Canada Order of Merit in 2013, earning $52,114.29 for his efforts.

Read more in this story by the Hamilton Spectator.

Golf Channel’s Matt Ginella travelled to Nova Scotia with Ben Crenshaw, Mike Keiser and Bill Coore to take a look at Cabot Links in Inverness, N.S. and check out the development of Cabot Cliffs – a new course slated to open in 2015.