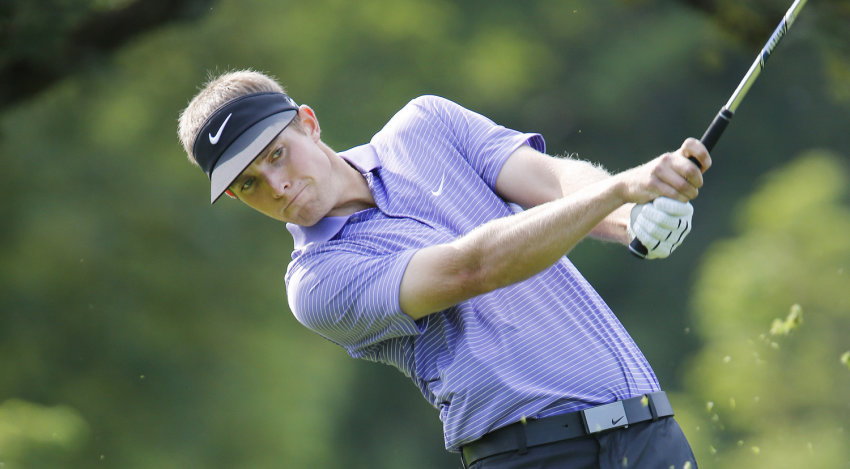 Chris Williams flirted with a 59 on Saturday before breaking the course record.

CALGARY – Moscow, Idaho’s Chris Williams fired a course record 9-under 61 on Saturday at The Links of GlenEagles to take the 54-hole lead at the Mackenzie Tour – PGA TOUR Canada’s ATB Financial Classic.

The former No. 1-ranked amateur and 2013 Ben Hogan Award winner at the University of Washington will take a one stroke advantage over Tucson, Arizona’s Jonathan Khan into Sunday’s final round, sitting at 15-under through three rounds.

“Every time you play a course you get more comfortable. I just had a good vibe feeling after yesterday. I finished really well on the back nine. I knew there were a lot of birdies out there and hit a lot of good shots and made a lot of good putts,” said Williams, who shot 29 on the front including a hole-in-one from 144 yards at the fifth hole.

“Oh yeah. Definitely,” said Williams of whether golf’s magic number was on his mind. The 24-year old missed a short birdie putt on the 17th and an eagle putt of about 20 feet on the 18th that might have secured the sub-60 score. “I thought about it all day. I made the turn in 29 and knew the back nine isn’t tough and I could make some birdies.”

With a chance for his first Mackenzie Tour win on Sunday, the former University of Washington Husky will look to follow in the footsteps of The Players Cup champion C.T. Pan and Syncrude Boreal Open presented by AECON winner Kevin Spooner as former Huskies to win on Tour this season.

“It was just kind of flowing,” said Williams of his round, adding that it was one of the best he could recall of his already strong young career. “This course was playing tough today. The greens are firming up and it was windy. It was a great round, and I can’t take anything bad away from it.”

Khan, who tied the previous course record at GlenEagles with a 62 on Friday, was one back after a 66, with Athens, Georgia’s Mookie DeMoss and France’s Julien Brun two further behind at 13-under. Sherwood Park, Alberta’s Danny Sahl, who caddies for Mike Weir on the PGA TOUR, shot his second 64 of the week to sit three back.