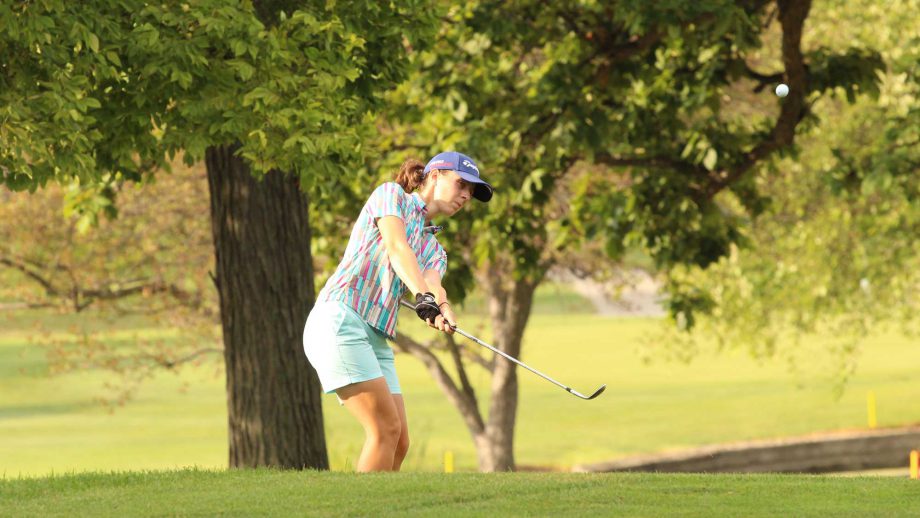 The Toronto, Ont. native put in a strong effort with five birdies, but struggled after making three bogeys on holes 5,9 and 17. Foster ended the tournament in eighth after an overall score of 203 (67-67-69).

Entering today’s final round, Louise Ridderström (Stocksund, Sweden) was three shots off the lead, but a competitive course record 8-under par 63 at Raven’s Claw Golf Club this afternoon propelled her to victory at the inaugural Valley Forge Invitational.

“It’s pretty amazing,” Ridderström said smiling after her first Symetra Tour win. “Even before the round, I knew I had a chance. After I made a birdie on No. 9 and I was 5-under after nine holes, I was like, ‘I have a pretty good chance now.’ In the same way, I was trying to think just stick to what I’m doing.”

Ridderström finished at 16-under par overall and the 8-under score today was a career-low round, besting her previous mark of 6-under set in the second round yesterday.

With friends by her side and the Swedish Women’s National Team coaching staff in attendance, Ridderström turned in a round for the ages. However, it all came back to one message she recited to herself throughout the final round.

“Winning is hard, but if it’s your turn, then it’s your turn. I was telling myself that all day,” said Ridderström, who won by four strokes. “My one and only goal today was to concentrate on myself and try to hit the best shot that I could possibly hit every single shot. It was just one shot at a time and I think I stuck pretty well to that.”

Exactly one week ago, a fellow Swede in Jenny Haglund (Karlstad, Sweden) won the Symetra Classic in Davidson, N.C., at River Run Country Club. On the bag for the sudden-death playoff was Ridderström.

The experience may have just provided the motivation she was looking for.

“Of course, and it made me so happy to see her win,” Ridderström said. “She is a good friend and we also drove all the way from Davidson to here. We talked and I told her it was so amazing because she won a Ladies European Tour (LET) event just a few weeks ago, too. She was like, ‘If I can do it, you can do it too.’ Seeing her win was very inspirational.”

It’s no coincidence then that Haglund was one of the first players standing on No. 18 green today waiting to congratulate Ridderström, and douse her with water.

“I saw her on top of the leaderboard the whole day,” said Haglund. “That was really exciting and I’m really happy for her. She’s working extremely hard, so it’s great.”

Two weeks off now sit in front of Ridderström, who will travel back to Sweden to attend her sister’s high school graduation. In that time, the winning feeling and how her game has developed is sure not to go anywhere.

“I don’t get to see them very often and to see my sister graduate means a lot to me,” Ridderström said. “I’m not going to lose the momentum. If anything, this gave me more confidence and even more desire to go out and practice and get even better. Now I know it’s possible to win.”

For 36-hole leader Laura Wearn (Charlotte, N.C.), today’s final round in the inaugural Valley Forge Invitational was a tough pill to swallow.

Wearn carded a 1-under par 70 and finished tied for second with Min-G Kim (Cheongju, Republic of Korea) at 12-under par overall, four shots back of winner Louise Ridderström.

“Obviously there is disappointment, not necessarily in where I finished, but I was hoping to play well today,” said Wearn. “I don’t think I had my best game, but Louise went out there and won it. Congratulations to her, she had an awesome tournament. She’s a great person and a great player.”

After 18 holes today, Wearn saw four bogeys, three birdies and an eagle on the scorecard. However, following the first two rounds, it was not the performance she was looking for.

“I guess some days you just don’t have your best game,” said Wearn. “I tried to be patient, so hopefully next time I’m in this position I can have a better result. The putts didn’t drop and I didn’t hit the same shots I hit the first couple days.”

Even so, there is plenty of positives to take from her week at Raven’s Claw Golf Club, especially heading into the week off for the Furman University alumna.

“I felt like I was struggling coming into this event,” Wearn said. “To post 12-under is a big confidence booster, motivating me to work harder. Hopefully I can have some good results the rest of the year and finish well.”

VOLVIK RACE FOR THE CARD UPDATE

After the Valley Forge Invitational, there was some changes to the Volvik Race for the Card top-10, including newcomer Louise Ridderström who catapulted up the standings from No. 24 to No. 7 with the win.

“To win and find myself in the top-10 on the Volvik Race for the Card all in one day is spectacular,” said Ridderström. “Now I will need to focus even more to improve my game and hopefully improve my spot in the rankings.”

Meanwhile, Nos. 1-4 did not change. Jenny Haglund maintained her position in the top spot by finishing tied for fourth today at 11-under par overall to receive $4,169. The rest of the group in order pitsDottie Ardina (Laguna, Philippines), Elizabeth Szokol (Winnetka, Illinois) and Vicky Hurst (Melbourne, Florida).

Furthermore, Stephanie Meadow (Jordanstown, Northern Ireland) and rookie Pajaree Anannarukarn (Bangkok, Thailand) flipped positions, with Meadow moving up to No. 5 and Anannarukarn moving down to No. 6.

Meadow went 7-under par in today’s final round to finish tied for eighth at 10-under par overall, while Anannarukarn ended tied for 34th at 3-under overall.

“It’s great momentum for the rest of the year because I didn’t put it together the first two days, but I did the last,” Meadow said. “I’m happy to move up one place and will now get some rest to be rejuvenated for the June stretch.”