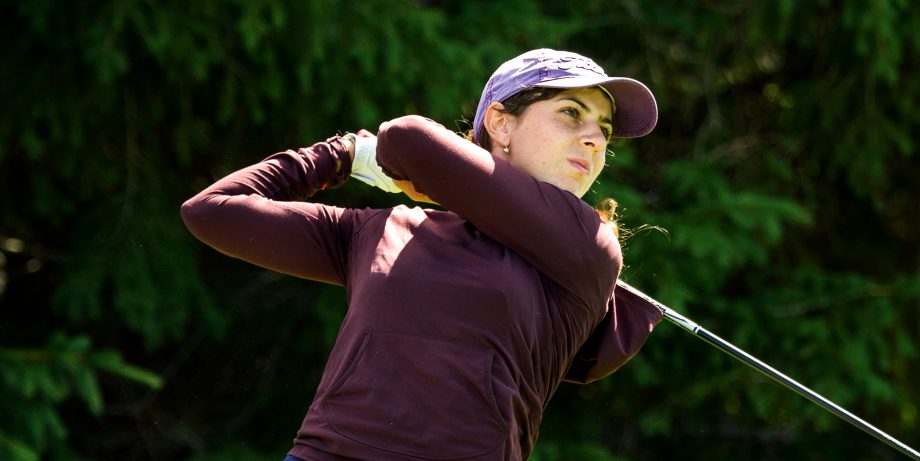 LANCASTER, PA. – You will not be able to accuse Christina Foster of picking her spots.

The 19-year-old from Concord, Ont., decided to turn pro here, at the Lancaster Country Club, host of the 2015 U.S. Women’s Open.

The Lancaster C.C., designed by William Flynn and opened in 1920 in the rolling hills of Pennsylvania Dutch country, will play to a rating of 79 and a slope rating of 149.

It’s total of 6,583 yards is lined with deep, juicy rough made tougher by rain early in the week and severely sloping greens.

Yet this is where Foster has decided to make her debut as a professional.

“I definitely wanted to (turn pro) this year and I thought if I made the U.S. Open, why not?” Foster said after a practice round on Tuesday. “It’s my favourite event to watch on TV. It was my biggest dream to qualify for it. So why not turn pro and make it my first start and my most memorable start for me?”

Foster earned her spot in the field by posting a total of 145 – good for medalist honours – in sectional qualifying at Westmoreland Country Club in Wilmette, Ill.

She finished up her amateur career with a second-place finish at the Porter Cup at Niagara Falls Country Club in Lewiston, N.Y., and advanced to the semifinals of the Toronto Star Women’s Amateur last month.

She has played in seven USGA championships, making it to the round of 16 at the 2010 U.S. Junior Girls Amateur.

A memorable victory was chipping in five times in a row when she was 13 and winning a bet with her dad, Michael. The stakes were a trip to Disney World.

But this, of course, is a whole other level at the Lancaster C.C.

“It’s beautiful. It’s probably one of the best courses I’ve played,” Foster said. “It’s in great shape. It’s pretty long. You’ve got to be accurate off the tee and not missing it in the wrong places and short side yourself.

Foster, as well as her brother, John – who is on hand along with the rest of her family – are products of the Tiger Woods era in golf.

He was John’s favourite player and made John want to try golf.

“My brother was watching Tiger on TV when he was six (John was six; not Tiger). He thought he wanted to try it because it looked fun. Whatever he would do, I would do. So I followed my brother. I actually have the video of my first ever golf swing. I was probably three and been at it ever since,” she said.

Foster is not hard to spot from a distance here.

She plays left-handed. That’s certainly not unusual for a Canadian (the always reliable Internet tells us the number of Canadians who play golf left-handed ranges from seven to 30 percent).

A female lefty is more rare and a professional lefty is, well, very rare. Foster said she can recall playing with only two or three other lefties in her amateur career.

How did she wind up on that side of the ball?

“It’s my natural way. I played baseball left handed as a kid. But I kick with my left, I throw with my right, I write with my right,” she said before concluding with:

Her game plan for this week: “Staying in the moment and really committing to shots and not being tentative. Just being aggressive on my lines and not be scared.”

She might be unique as a rookie left-hander this week, but that game plan is sounds like it will be pretty common.