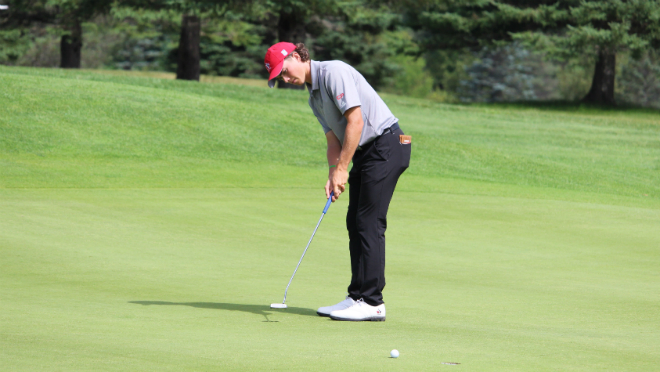 Vandette’s 10-under-par 62 included four-straight birdies to close out his round. An eagle on the par-4 15th was the highlight of the 18-year-old’s day. The lone blemish on his scorecard was a bogey on the par-4 11th.

“I’m just really excited in general, it was a fairly smooth day out there,” said Vandette. “There’s still 54 holes ahead. You can’t sprint the marathon. I was pretty comfortable. I don’t think anything was too flashy or incredible today, everything was just rock solid.”

The Team Canada National Junior Squad member equaled the lowest-single round score in the 81-year history of the championship. Calvin Ross, a Fredericton, N.B. product, shot 62 in the third round of the 2017 championship. Ross would go on to win the tournament.

“I’m extremely honoured, especially to do it at the Canadian Juniors,” said Vandette of setting the course record. “It’s really something special. It was just making very few mistakes and staying out of trouble.”

Dustin Franko of Delta, B.C., sits in second place at 7 under. Franko was bogey-free on Monday, and made three straight birdies on holes No. 11 through No. 13. However, his remarkable round was almost in jeopardy after Sunday’s practice round.

“It was the low round of my career and I’ve never had a bogey-free round either,” said Franko. “I had a bit of a scare yesterday. I walked off after nine holes of the practice round because I had lower back pain after mishitting a shot. I was stretching all night and had hot and cold [compresses] on-and-off. This morning, I had a later tee time, so I got to stretch out quite a bit. It didn’t bother me out on the course at all.”

One stroke behind Franko is Chester, N.S., product Mark Chandler. Chandler was also bogey-free with two of his six birdies coming on par-3s.

“I hit the ball well, found the fairways and greens,” said Chandler. “Some putts dropped for me. This course is pretty open, so hitting the driver well really helps; it gives you a lot of wedges onto the greens, so there’s some good scoring opportunities there.”

Thomas Latter (Mississauga, Ont.) is leading the 16-and-under Juvenile division with an opening round of 5-under-par 67. Latter is tied for fourth in the overall individual competition with Bennett Ruby (Waterloo, Ont.) and Carter Graf (Sylvan Lake, Alta.).

Team Québec consisting of Vandette, Laurent Desmarchais (Longueuil, Que.) and Logan Boucher (Beaconsfield, Que.) jumped out to an early lead in the 36-hole inter-provincial team competition. The trio combined for a score of 13 under par and a six-stroke lead over Team Nova Scotia.

Team Alberta, the three-time defending champions, sit in third place at 5 under par. The inter-provincial team champion will be crowned on Tuesday.