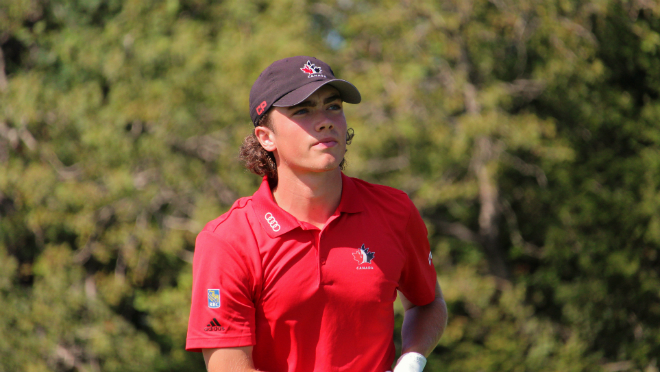 Vandette had his lead shrink to two strokes during Wednesday’s third round. He began the day with three birdies on his first six holes, but two straight bogeys on holes No. 16 and No. 17 made for a round of even-par 72.

“I was in a good rhythm at the start and putts were falling,” said Vandette. “At the end, I think I made a couple of dumb decisions, just like yesterday. That’s what cost me the most shots.”

The 18-year-old is looking to become the first champion to defend his title since Mitch Sutton (London, Ont.) did so in 2009.

“The city of Hartland and these people really care about this week and they’re showing it,” added Vandette. “A lot of people are showing up and it’s actually a lot of fun. They’re proud to host and us as players are fortunate to have a town who cares about it.”

Vandette’s Team Canada National Junior Squad teammate, Jeevan Sihota (Victoria) continued to play consistent golf, firing a round of 4 under, and is now sitting at 11 under for the tournament. Sihota birdied four of his first five holes and played even-par golf the rest of the way. He has only three bogeys through the first 54 holes of the competition and is two back of Vandette.

“It was a pretty good overall day,” said Sihota. “I missed quite a few short putts today, which hopefully tomorrow I’ll be able to hole those. I’m driving it really well – if you’re in the fairway here, it’s hard to make bogey from 60 yards.”

Sihota, 15, is leading the 16-and-under Juvenile division by four strokes over Tommy McKenzie (Calgary). All three of Sihota’s rounds have been in the 60s.

Vandette, Sihota and Carter Graf made up the final group of the third round. Graf shot even-par and is in a tie for third at 9 under, four back of Vandette.

Brady McKinlay shot a 7-under-par 65 on Wednesday, tied for the low score of the third round with Ethan de Graaf (Edmonton, Alta.). McKinlay, a Lacombe, Alta. product, was bogey-free while making back-to-back birdies on holes No. 14 and No. 15. McKinlay is tied with Graf for third at 9 under.

The shot of the day belonged to Nicolas-Guy Landry of Calgary. Landry made a hole-in-one on the 163-yard 17th – his first career ace.

The start of the third round was delayed by an hour following a fog delay. Tee times for the final round will begin at 9 a.m.