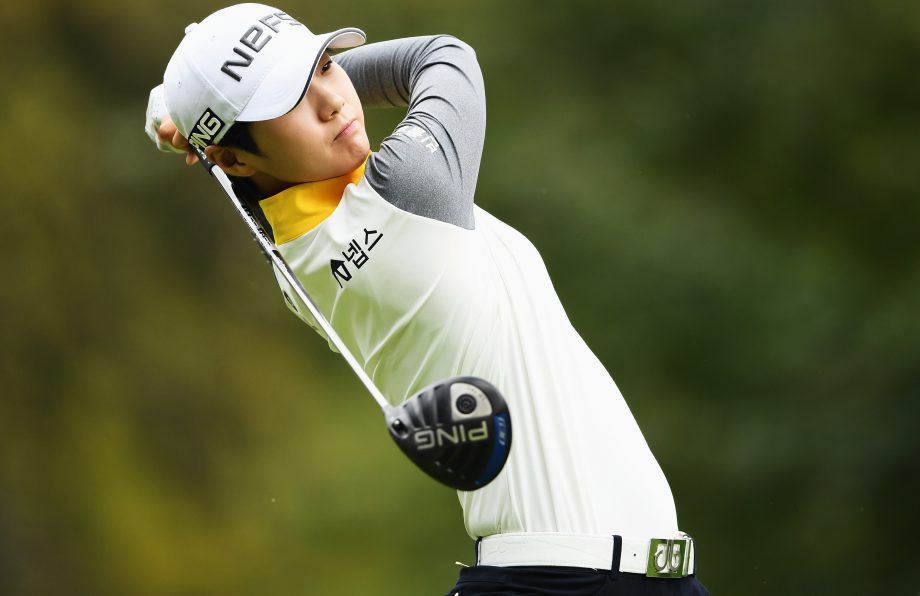 EVIAN-LES-BAINS, France – South Koreans In Gee Chun and Sung Hyun Park birdied eight holes each as they carded 8-under rounds of 63 for a share of the lead in the first round of the Evian Championship on Thursday.

In the fifth and final major of the season, New Zealander Lydia Ko’s bid to defend her title – and clinch a third career major by the age of 19 – got off to a rocky start as she finished seven shots behind the co-leaders.

“It was tricky for me because on the back nine I was not hitting fairways,” said Ko, who has 14 career wins on the U.S. LPGA Tour. “Hopefully I’ll be able to hit some fairways tomorrow.”

“I could see the putting lines and I was good rolling the ball on those lines,” she said. “The greens are getting softer this year.”

While Ko’s play was patchy, with a bogey and only two birdies, her rival Ariya Jutanugarn of Thailand had a day to forget with a 2-over 73 featuring a triple bogey.

Ko and Ariya have a good chance at Evian of taking the Annika Major Award, which rewards the major winner with the best combined record at all five majors of the season, and is named after 10-time major winner Annika Sorenstam.

A win here would clinch the award for either Ko or Ariya, but they face an uphill struggle.

Ko revealed herself to the golfing world at the Evian in 2013, when she finished second as a 16-year-old amateur.

This year, another young player emerged into contention on her tournament debut.

American Annie Park posted an eagle and five birdies in a 7-under round of 64 to move into a tie for third place with Olympic bronze medallist Shanshan Feng, who was third here last year. They are one stroke behind the leaders.

Annie Park’s performance caught the eye; and not least because her mum was caddying for her.

“That was fun. It was good to have my mum back on the bag. The last time she caddied was Hawaii in April,” she said. “She keeps things light and does some dances out there.”

Ranked 201, Annie Park joined the tour this year. She showed good composure in overcast and somewhat drizzly weather conditions on the picturesque course perched over Lake Geneva, enjoying a run of birdie-birdie-eagle on her front nine, then starting and finishing with birdies on the back nine.

American Angela Stanford posted a 6-under 65 to move into fifth, one shot ahead of South Koreans So Yeon Ryu and Eun-Hee Ji.

When Ko sank her first birdie of the day, a 15-meter effort on the fifth hole, it drew a rueful smile from Pettersen, who had just missed with her birdie attempt from a similar distance.

Ko bogeyed the eighth hole and she was again in trouble on the 10th when her tee shot landed in the rough between two trees.

She saved par with a good escape shot close to the green.

“It’s a good thing my wood shots and chip shots were good enough,” said Ko, who last year became the youngest man or woman to be ranked No. 1.

Women’s PGA champion Brooke Henderson of Canada ended the day one shot ahead of Ko at 2-under.

Pettersen had a difficult day, joining Ariya and American Lexi Thompson, last year’s runner-up, at 2 over.

U.S. Open winner Brittany Lang had a nightmare with two double bogeys and three bogeys in a 5-over 76.