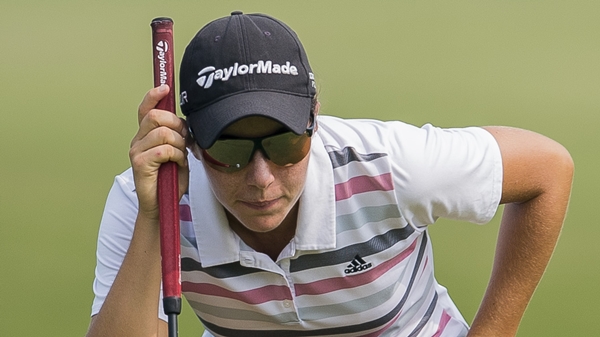 NAPLES, Fla. — Michelle Wie suddenly is in a position to consider a million ways how a great year can get even better.

On a tough day that only rewarded the best shots, Wie holed out for eagle with a pitching wedge on her way to a 5-under 67 that moved her up high enough on the leaderboard Friday at the CME Group Tour Championship to get into position for a $1 million bonus.

Carlota Ciganda of Spain took advantage of a putting lesson from Spanish great Jose Maria Olazabal to make five birdies for a 67 that gave her a share of the lead with Julieta Granada of Paraguay, who scrambled for a 71. They were at 7-under 137 going into the weekend at the Tiburon Golf Club.

Morgan Pressel, who rallied on the back nine Thursday to overcome a rugged start, shot a 66 and was one shot out of the lead.

All of them would love to win the LPGA Tour season finale because it’s a big title with a $500,000 check for first place. None has a mathematical chance at the $1 million bonus for winning the points-based Race to CME Globe.

And that’s where Wie comes in.

Wie, who captured her first major this year at Pinehurst No. 2 in the U.S. Women’s Open, is No. 4 in the Race to CME Globe. Only the top three players – Stacy Lewis, Inbee Park and 17-year-old Lydia Ko – can win the $1 million bonus simply by winning the tournament.

Wie needs a little bit of help, only she did most of the heavy lifting.

Even though she made bogey on the par-5 opening hole that irritated her, the 25-year-old from Hawaii bounced back with her eagle on No. 7, birdies on the par 5s and a score that put her only two shots out of the lead.

“All I want is an opportunity, a chance,” Wie said. “I’m really proud of myself for giving myself that today. I just want to go out there tomorrow and put myself in a great position for Sunday. That’s all I want, and that’s all I’m asking for. Whatever happens, happens.”

She did get some help from the top three.

Park couldn’t get a putt to drop. She also had a 74. Ko had another 71 and was five shots behind.

Lewis can sweep all the significant awards at this LPGA Tour finale provided she finishes ahead of Park, and so far she is three shots ahead. Not to be forgotten is that $1 million packaged in $100 in a glass case that they posed with on the eve of the tournament.

Along with prize money, the winner of the Race to CME Globe will receive the largest single-day payoff in the history of women’s golf.

The first step is to try to catch the leaders.

Ciganda was home in Spain last week when she called Olazabal and asked him for a lesson.

“We stay there like three hours on the putting green, just hitting putts,” Ciganda said. “He told me a few things and it seems like it’s working, so I’m pretty happy. I have to thank him. Then we played last Friday before coming here, so it was really nice to play. He’s so passionate about golf. It just his life.”

And how did that match turn out? Ciganda teamed with a Challenge Tour player in Europe, their best ball against Olazabal.

Pressel was 3 over through 10 holes in the opening round when she battled back for a 72. She was headed for another slow start Friday until knocking in a 15-foot par putt on the third hole, and then she was on her way to the best round of the day.

Granada spent most her time swapping birdies with bogeys, though she stayed atop the leaderboard.

Sarah Jane Smith (69) and Sandra Gal (71) joined Wie at 5-under 139, while So Yeon Ryu had another 70 and was three shots out of the lead. Ryu is at No. 5 in the Race to CME Globe and is on the fringe on contending for the big bonus.

The weekend is important for Wie to keep moving forward, and for Lewis, Park and Ko to start making up ground.

“You can make up a lot of ground quickly,” Granada said. “But your game has to be on. The toughness of the course will show it.”