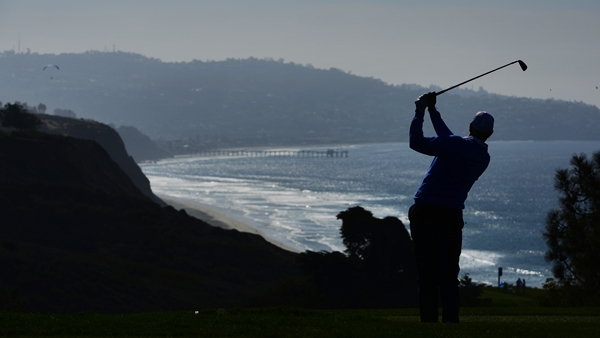 SAN DIEGO – The best score belonged to Stewart Cink. The best round belonged to Pat Perez. Tiger Woods didn’t come close to claiming either Thursday in the Farmers Insurance Open, where the seven-time champion failed to break par in the opening round for first time in his career.

Cink ran off three straight birdies late in his round on the easier North Course at Torrey Pines for an 8-under 64. That gave him a one-shot lead over Gary Woodland, who also was on the North, which is more than 600 yards shorter.

Perez was on the South Course, host of the 2008 U.S. Open and with greens so firm this year that it felt like a major. Perez had a 67, the best score on the South by two shots, and even more astounding is that he played bogey-free.

The South played nearly four shots harder than the North.

Even at eight shots behind, he wasn’t worried about a chance to win at Torrey for the ninth time – including a U.S. Open. The courses are so different than it’s difficult to gauge where anyone stands until everyone has had a crack at both courses. The weekend rounds are on the South.

He was coping with a back locked up on him, unusual for Mickelson because he doesn’t have a history of back pain. It got so bad at one point that Mickelson thought about withdrawing from his hometown event, especially after his 4-iron on the par-5 18th at the North Course nearly went out-of-bounds. Mickelson used his short game to make birdie, and then made another birdie on the next hole and he scratched out a 69.