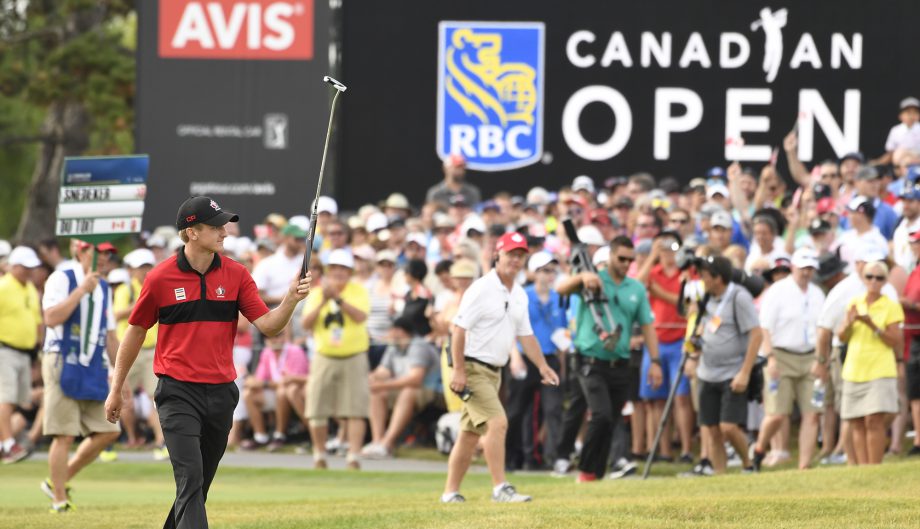 Valiant efforts by Canadian golfers resulting in close calls have come to define the RBC Canadian Open in recent years.

Amateur Jared du Toit’s remarkable performance through three rounds last year before tying for ninth, conjured up some of those memories.

The national championship was last won by a Canadian in 1954 but since 2001 players such as David Morland IV, Adam Hadwin, David Hearn and most famously, Mike Weir, have come close to breaking the drought.

Weir’s close shave came in 2004 at Glen Abbey. The lefty from Brights Grove, Ont., was at the height of his powers back then and so too was Vijay Singh. Singh came to Oakville the No. 1-ranked player in the world and was enjoying one of the most successful seasons in the modern era by someone other than Tiger Woods. Weir, about 18 months removed from his Masters win, nursed a two-shot lead to start Sunday action and appeared in control as he made the turn, especially when he made birdie on the 10th hole.

“Oh, boy, this is crazy,” said a bemused PGA Tour official surveying the crowds that had gathered around Weir’s group as he was about to tee off on 16.

The crowd was sensing history being made. And it would have been perfect timing  — 50 years since Pat Fletcher’s win, days after Canadian legend Moe Norman had died, and a day before Team Canada was about to win the World Cup of Hockey a short distance away in Toronto.

It wasn’t meant to be. Not long after that PGA Tour official voiced his concern, Weir made bogey on No. 16 and failed to birdie No. 18 in regulation. That set the stage for Singh’s triumph on the third extra hole when Weir found water playing the 18th for the third time in less than an hour.

Weir, but also Hadwin and Hearn, who have had their own brushes with winning, have all voiced little in the way of overriding regret. Recent conversations with all three men said that the biggest takeaway from their experience was the sheer excitement, tinged with a bit of disappointment.

“None,” said Weir, when asked if he had any regrets, “just that I didn’t win but it was a great week.”

Hearn’s tournament two years ago was very much like Weir’s but also different. He was in the driver’s seat playing No. 16 too but Jason Day reeled off three birdies playing a group ahead — as Singh was with Weir 11 years earlier. While Day wasn’t yet the top-ranked player in the world, his run that started at Glen Abbey soon landed him there.

Hearn, who wound up in third place, and Weir were veteran PGA Tour pros when they almost won the national championship.

Adam Hadwin was just a second-year pro who was little known outside the Canadian golf community. Playing at Shaughnessy G&CC not far from where he grew up in Abbotsford, B.C., Hadwin had sole possession of the lead on Sunday before four-putting the par-3 eighth hole. The two shots he dropped there cost him a spot in a playoff eventually won by Sean O’Hair.

Looking back, for Hadwin it was the newness of the experience that made it so unique, surreal even.

“Nothing was expected of me,” he recalls “I wasn’t even a tour member at that point . . . I really had nothing to lose.”

Though not quite as close, other Canadians have contended as well. David Morland IV was in contention all four days at Royal Montreal GC in 2001. After firing a 66 on Sunday, Morland needed the leaders to falter but Verplank was steady with a 67 and eventually won by three shots. Morland was another two strokes back in a tie for fifth.

Though they never seriously contended for the title, Graham DeLaet (T7) and Brad Fritsch (T9) both posted top-10s three years ago, also at Royal Montréal. Eight years ago at Glen Abbey, two Canadians — Stephen Ames and Chris Baryla — also had top-10s, both tying for eighth.

Stretching back further, Dave Barr had his best RBC Canadian Open showing in 1988 when he tied for fourth, with fellow Canadian Gordie Smith tying for seventh. Barr’s showing matched Richard Zokol’s performance five years earlier, which to that point was the best performance by a Canadian during the Glen Abbey era of the tournament.