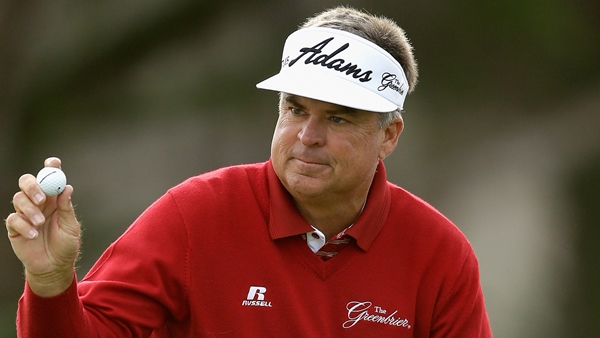 RIDGEDALE, Mo. – Kenny Perry and Russ Cochran teamed to birdie the final three holes for a share of the lead with Jeff Sluman and Fred Funk on Friday in the Champions Tour’s Legends of Golf.

The leaders were at 10-under 61 after their better-ball rounds on the Buffalo Ridge course.

“For the most part we hung in there, got the ball in the fairway and had a couple chances most of the time,” Cochran said. “Kenny had the eye and when a guy’s got that, you want to get out of his way.”

In Savannah, Georgia, last year, Sluman teamed with Brad Faxon to win the Champions Division. Sluman turned to Funk after Faxon was unable to play because of previous commitment.

“We’re just really comfortable together, No. 1, but we got off to a really good start and that helped,” Funk said. “We made some really good putts.”

Other players opened at Top of the Rock, the first par-3 course used in a PGA Tour-sanctioned event. The teams of Tom Watson-Andy North, Nick Faldo Eduardo Romero and Craig Stadler-Kirk Triplett had the best rounds there, finishing at 5-under 49 after nine holes of alternate shot and nine of better ball.

In the Legends Division for players 65 and older, Bruce Fleisher and Larry Nelson took the lead with a 62 at Buffalo Ridge. The teams of Jack Nicklaus-Gary Player, Lee Trevino-Mike Hill and Graham Marsh-John Bland shot 1-over 55 on the par-3 course, the site of the final rounds in each division.

“We never seemed to get the right club in our hand,” said Nicklaus, who designed the par-3 course. “All day

long we’re struggling with a club, even on the second nine. … We made two bogeys on the alternate shot because we didn’t have the right clubs.”

Play was delayed twice because of rain and lightning and players were allowed to lift, clean and place their golf balls on the Buffalo Ridge course.

Perry and Cochran birdied four of the first five holes and eagled the par-5 eighth – Perry hit a hybrid to 6 feet – in a 6-under 29 on the front nine. The Kentucky duo also birdied No. 10 and closed with three more.

“Kenny came in there and really got things started,” Cochran said. “He just had a terrific front side, especially, and really the whole day. … He made many birdies and an eagle. Never really missed a shot. So as far as I was concerned, I was trying to fill in.”

Funk and Sluman played the first nine in 7-under 28 and added three birdies on the back nine.

“We both played really honestly solid golf all day,” Sluman said. “I think after 12 holes we each contributed like on six holes each, so we were just playing solid golf, hitting it down the middle and giving ourselves two birdie chances every hole.”

Jim Colbert and Jim Thorpe were second in the Legends Division at 66. Butch Baird-Al Geiberger and Hubert Green-Allen Doyle shot 67.