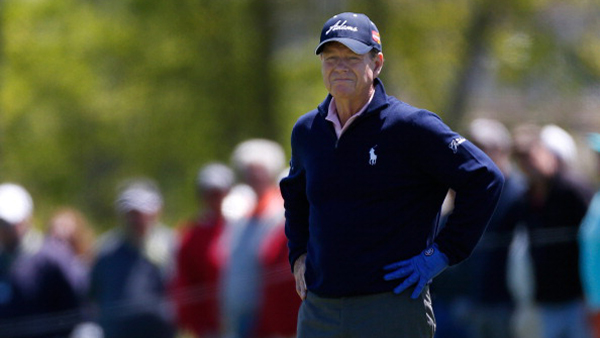 Colin Montgomerie said he looked forward to the fun when he joined the Champions Tour.

He was clearly enjoying himself Saturday in the Senior PGA Championship when he made a winding, 30-foot birdie putt on the final hole for a 3-under 68 and a one-stroke lead.

“Bloody great,” he said about the birdie putt that took the sting out of a bogey at the 17th hole.

“It was going a bit quick. Thank God the hole got in the way. It was downhill, down grain, but it held its line and went in. It was a joyous occasion in the Montgomerie camp.”

Trying to win his first senior major after failing to capture one of golf’s four biggest events on the regular tours, the 51-year-old Scot took a 7-under 206 total into the final round at Harbor Shores.

Bernhard Langer, the 56-year-old German star who has won twice this season on the Champions Tour, was a stroke back after a 69 that included a double bogey from a buried lie in a huge sand bunker on the seventh. He will play alongside Montgomerie for the fourth consecutive round Sunday.

Marco Dawson, Bart Bryant and Kiyoshi Murota were tied for third at 5 under. Dawson had a 64, the best round of the tournament. Bryant and Murota shot 70.

Montgomerie, who said he has nothing to prove to anybody or himself in golf, is trying to win an official event for the first time on U.S. soil. He does have victories in the country in the 1998 Andersen Consulting World Championship and 2000 Skins Game.

“So I came here to enjoy one’s self,” he said. “I would like to win wherever that might be. It would be great to try and win in America. I always felt to win in America is a very difficult thing to do, on an away patch, on golf courses that are usually suited to the American style of play.”

Langer, a two-time Masters champion, has 20 victories on the 50-and-over – including majors at the 2010 U.S. Senior Open and Senior British Open. He’s looking forward to playing with Montgomerie again, and has a plan.

“I still need to play very aggressive, smart aggressive as I call it, and take my chances because Colin is playing very solid golf and there’s a whole bunch of other guys,” he said. “If any of them post a 6 or 7 under in front of us, then we have our work cut out to just stay in touch.”

Tom Watson, among the six-way tie for first through 36 holes, had a 72 to drop four shots behind.

Dawson made the biggest move of the day with nine birdies. He said the bounces went his way on the tricky Jack Nicklaus-designed greens.

John Cook, who last week in the Regions Tradition lost the lead on a double-hit confirmed later by video, birdied three of the final four holes for a 68 to join Watson, Jay Haas (70), David Frost (69) and Gary Hallberg (70) at 3 under.

Cook said another good round will be needed to make up ground on Montgomerie and Langer.

“Those guys have won a lot of tournaments, so it’s not like somebody’s up there that shouldn’t be there,” he said. “You’ve got to keep them in sight and kind of pick your spots.”

Kenny Perry, who won the Regions Tradition for his third Champions Tour major title in less than a year, was five strokes back at 2 under after a 66. Two years ago at Harbor Shores in the 2012 Senior PGA, he set a championship and course record with a final-round 62.

“I think what I’m going to need to do is shoot another 62,” Perry said. “At least I’ve got a shot. At least I shot a number today to put me in some kind of position. If I shoot one of those miracle rounds tomorrow, I can do it.”