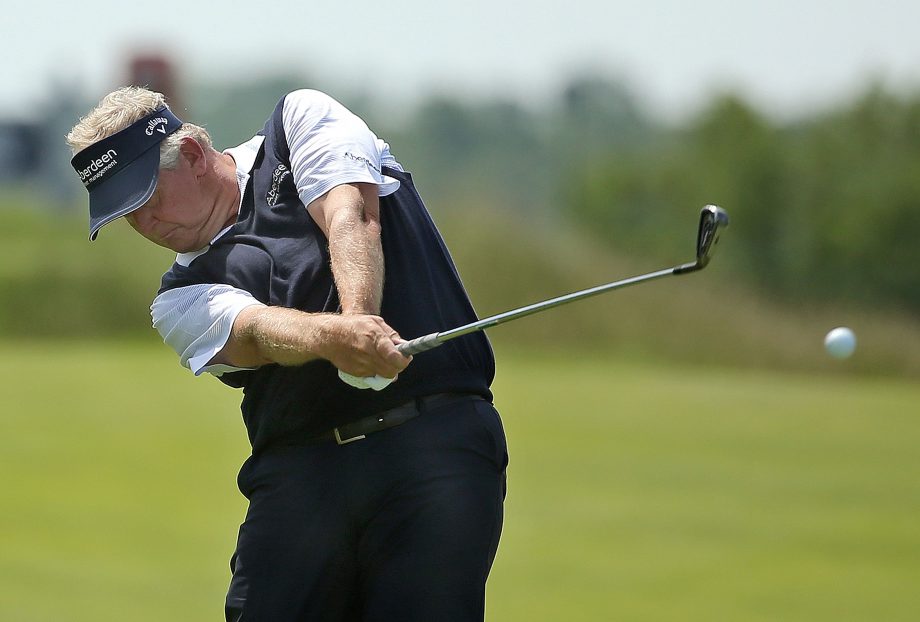 FRENCH LICK, Ind. – Colin Montgomerie was long considered one of the best players in golf who had never won a major championship.

As a senior, he has said no more.

Montgomerie shot a 2-under 70 on Saturday on The Pete Dye Course at French Lick Resort to take a three-shot lead into the final round of the Senior PGA Championship.

At 5-under 211, the 51-year-old Scot was in position to win his third senior major championship in a year. He won the Senior PGA last year at Harbor Shores in Michigan, and took the U.S. Senior Open in July in Oklahoma.

“It was frustrating to come to these championships and walk off with the runner-ups’ medal,” Montgomerie said. “I’ve done that five times. You try your damnedest and you come up a shot light.

“I’m more relaxed now. I’m more relaxed than I was. My temperament is more consistent and I think that’s helping. I’m enjoying it, I really am. I’m a great believer that if you enjoy something, you’re usually quite good at it.”

Bernhard Langer, a four-time winner in senior majors, was second after a 68. He eagled the 415-yard, par-4 eighth hole and closed with consecutive birdies after a bogey at the par-5 16th.

Montgomerie and Langer will play in the final twosome Sunday, just like they did last year at Harbor Shores, when Montgomerie shot a 65 and won by four.

Scott Verplank, Esteban Toledo and Brian Henninger were tied for third at 1 under. Verplank shot 70, Toledo 73, and Henninger 74.

Henninger made a triple bogey on the 16th to drop out of a share of the lead. His second shot on the 539-yard hole darted right, into deep, deep rough and he had to declare his ball lost.

Second-round leader Tom Lehman had a 79 to drop into a tie for 13th at 2 over.

“I just didn’t make them,” said Lehman, who had three three-putts and 34 putts in all.

Langer was fortified by his birdie-birdie finish, but he wondered what might have been after hitting a wedge from 80 yards over the green at 16 and making bogey and missing a couple short putts.

“I had two of the worst lip-outs ever in my life,” Langer said. “On No. 3, I hit a putt that went in on the left, went all the way around and came back out this way. So it went 460 degrees.”

Thirty of the 76 players who made the cut shot par or better on a sunny Saturday with a tricky wind. Eleven players go into the final round within six shots of Montgomerie.

“I am where I am. I would rather be leading by eight, but I’m not,” said one of them, Verplank, who has struggled with injuries over his two Champions Tour seasons.

Verplank and the rest can by comforted by the severity of the Course. Things can happen fast on it. They happened fast Saturday.

A few minutes later and a few groups behind, Lehman three-putted No. 6 for a bogey. One group ahead, Toledo half-shanked his tee shot into the pond alongside the par-3 seventh green and made double bogey. Then Lehman missed the green at No. 7 and made another bogey.

Suddenly, Langer, Lehman, Toledo and Montgomerie were tied for the lead at 2 under. Anything can happen on a course as severe as Dye’s treeless, windswept hilltop monster.

“There’s a potential double around every corner here,” said Montgomerie, who had a lone bogey Saturday. “Long day ahead tomorrow. There’s a seven-mile walk, and the emotions will go up and down like a roller coaster.”