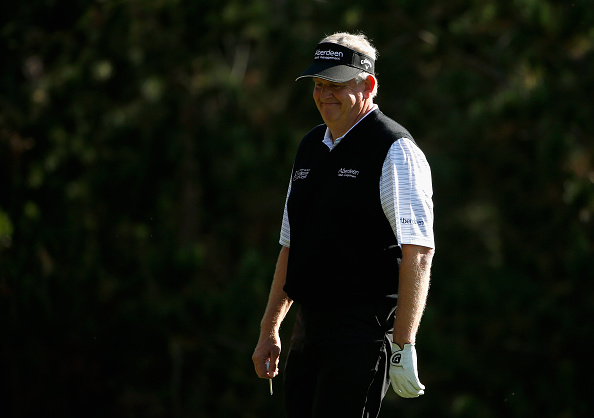 Second behind Jeff Maggert in the Charles Schwab Cup points race, Montgomerie is coming off a victory two weeks ago in England in a European Senior Tour event. All three of his Champions Tour victories have come in majors, the last a successful title defense in the Senior PGA Championship in May.

Olin Browne has second after a 65 at Poppy Hills.

Mexico’s Esteban Toledo was third at 6 under after a 66 at Pebble Beach.

Fred Couples birdied the 18th at Pebble Beach for a 66 to join Woody Austin at 5 under. Austin had a 70 at Pebble Beach, the site of the final round.

First-round leaders Tom Byrum and Sweden’s Jesper Parnevik struggled. Byrum had a 73 at Poppy Hills to fall into a tie for ninth at 3 under, and Parnevik was tied for 15th at 2 under after a 75 at Pebble Beach.

Maggert was even par after a 69 at Pebble Beach. He leads the tour with four victories, winning three of his last six starts.

Davis Love III was 2 over after a 70 at Pebble Beach. He won the PGA Tour’s Wyndham Championship last month to become the third-oldest champion in tour history at 51 years, 4 months, 10 days.

Calgary’s Stephen Ames sits T6 at 4-under while fellow Canadian Rod Spittle finished 1-under on the day to reach T21 at even-par.